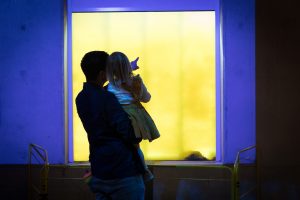 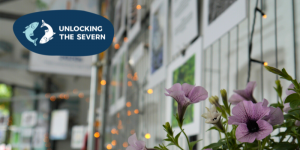 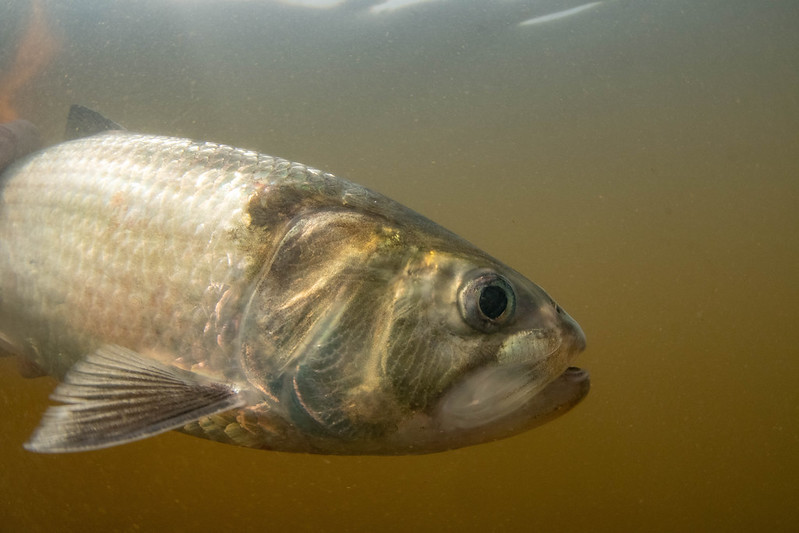 Pioneer individuals of an endangered fish, the twaite shad, have recently reclaimed habitat cut-off from them for nearly 180 years, as shown by early monitoring results.

Victorian navigation weirs built on the River Severn in the 1840’s blocked the migrating shad from their ancient spawning grounds and the local population of this once plentiful fish, crashed dramatically.  However, 35 generations of shad later, the length of the River Severn has been unlocked for twaite shad and many other migratory fish once again.

Unlocking the Severn completed the last in a series of four huge new fish passes earlier this year. And during the spring shad spawning run (occurring May and June), scientists have recorded encouraging evidence of early success using a range of techniques to monitor the restoration of an epic fish migration.

Twaite shad are a type of herring, that migrate each spring from the sea to spawn far upriver. They use only four UK rivers to spawn, and historically the Severn was the most important. This year, experts from Bournemouth University and the University of Hull tagged a record 100 Severn shad with tiny acoustic telemetry devices for the project. The movements of these fish were then tracked for the time they spent on the river, on average about 35 days. The unique sonic ‘pings’ of the tags are recorded by receivers arrayed along the river, and this creates an exact record of each tagged fish’s migration journey.

In addition, the project’s new fish pass in Worcester includes a unique underwater observation window.  Here, scientists and also public visitors have been able to directly witness the rare shad swimming through the fish pass.

Find out more about the monitoring techniques used this spring.

In film footage reviewed to date, 725 of twaite shad have been recorded successfully using the fish pass, on their migration upstream of Worcester. Additionally, over 940 sea lamprey have been recorded using the pass this year.  Sea lamprey are another endangered migratory fish species that head from the sea to spawn upriver, and are thus severely affected by human barriers along the way.  Lamprey are an ancient ‘living fossil’ species, dating back to the time of the dinosaurs, from a jawless fish lineage that predates the evolution of true fish (with bones and skeletons).

Of the twaite shad that were acoustically tagged, which only account for less than 1 in 50 of the shad migrating on the River Severn, pioneer individuals have been recorded passing through all the first three fish passes and as far as the vicinity of the fourth and final pass at Lincomb weir, near Stourport.  Plus AudioMoth recording devices deployed on the riverbank have this year captured the distinctive splashing sounds of shad spawning in newly reconnected habitat in the vicinity of all the new fish passes.

Charles Crundwell, Senior Technical Fisheries Specialist, Environment Agency comments: “The tagged fish are only a small sample of all the shad running the river, and we hope that some of the much greater pool of untagged fish will have gone through the final pass, beyond Lincomb weir, with unconstrained access to quality spawning habitat beyond. We eagerly await the results of eDNA analysis of water samples, which we hope will confirm the presence of shad further upriver.” 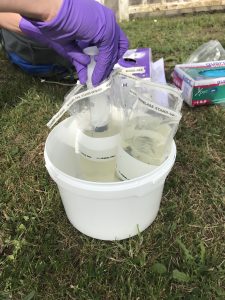 eDNA samples collected from Diglis Bridge on the River Severn.

The story of the Severn Shad is just one example of a pervasive problem for fish populations in the UK’s rivers. Shockingly, only 1% of the rivers in England, Scotland and Wales are free of artificial barriers, whilst 97% of the river network in Great Britain is fragmented. This means that on average, there is at least one artificial barrier every 1.5 km of stream in Great Britain. (1)

Jason Leach, Programme Director comments: “It’s thrilling to think that after so many years, we’ve put right a huge wrong to River Severn wildlife. With the help of modern engineering, we’ve restored the connectivity that Victorian river engineering took away. The shad can now access their ancient spawning habitats once again and we over the years to come, we look forward to witnessing the recovery of this courageous fish!”

The biggest conservation project of its kind in Europe, Unlocking the Severn is delivered by Canal & River Trust via partnership with Severn Rivers Trust, Environment Agency and Natural England and is made possible with funding from the National Lottery Heritage Fund and the European Union LIFE programme.

Find out more about the twaite shad in our blog all about this fascinating fish!