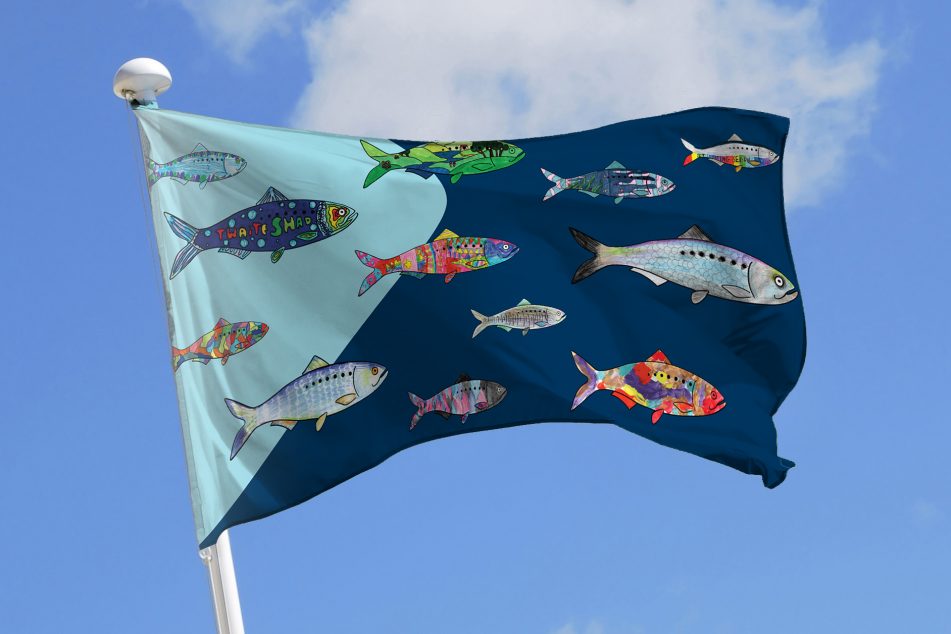 This May, for the first time in nearly 180 years, we’ve unlocked the UK’s longest river for the epic spawning migration of an endangered fish, the twaite shad. Four huge new fish passes now provide a route around weirs that have thwarted fish migrating upriver since Victorian Times.  These have finally reconnected ancient spawning grounds for shad. Shad normally visit the river in May, they were known locally as May Fish, so May Day marks the official start to the shad run. This year, on 1st May, a commemorative flag featuring May Fish designed by local children, has been raised at locations along the River Severn.

The new flag brings attention to the amazing may fish migration that is largely hidden from view; the fish journey from the sea into fresh water and would then naturally travel vast distances up the river to spawn. But navigation weirs built in the mid 1840’s to create more reliable passage for deeper barges carrying industrial goods blocked their path. Earlier this year however, the Unlocking the Severn project completed the final fish pass alongside four big weirs between Worcester and Stourport. This series of fish passes restores access to shad spawning grounds upriver and improves river connectivity for all the fish and the overall health of the river’s ecosystem.

The eye-catching flag features the winning artwork of local children inspired by the plight of this fish and the conservation project that has worked to restore the river to them. From over 1000 entries received, just 12 shad designs were picked for the final flag with including winning shad from children in Upton upon Severn, Malvern, Worcester, Stourport, Bridgnorth, and Shrewsbury .

Jennie Hermolle, Communications Manager for Unlocking the Severn comments: “We were bowled over by the number of entries and the effort and creativity of the children in our design competition for the new flag. From the quality of shad illustrations, we could have created literally hundreds of fabulous flag designs, so although we could all pick a limited number for our final flag, all the children taking part should so very proud of their work.”

Local professional illustrator Andy Robert Davies was involved. He explains: “I’m very pleased to have worked on this project and to see how my drawing of the shad was transformed into so many bold, colourful and intricate artworks. It was no easy task to select just a few fish from the huge number of entries as the standard was superb, but our aim was to make a selection that would work well together as a design that celebrates this beautiful fish and how important it is to the River Severn.”

We would also like to thank Andy for his drawing and essential creative input in the judging process as well as Lauren Susman of InkBerry for her fantastic design work pulling all the chosen shad together into the flag.

But most of all thank-you to everyone who entered their designs! The judges were so impressed by all the vibrant and creative artwork.  In fact, it was joyful to view shoals and shoals of illustrated shad.  So, we are exploring options to display all the entries in creative ways in the future.  If you know a prominent window that would like to publicly display local children’s shad artwork (from the more than 100o entries we recieved) – please do get in touch!

Here are the fantastic winning designs: