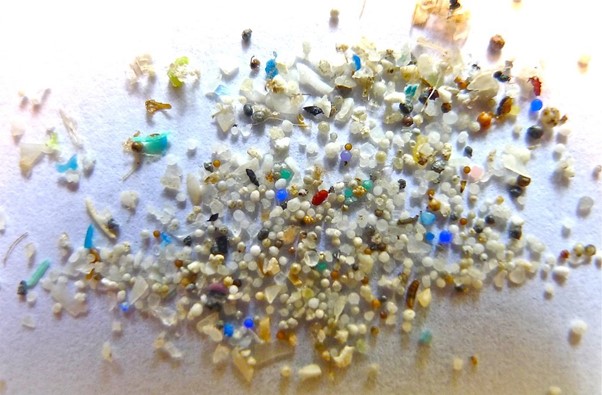 Written by James Skitt, a volunteer for the Unlocking the Severn project and Severn Rivers Trust.

Contamination and excessive pollution of marine and freshwater environments by litter is a significant environmental problem [1,2]. For the purpose of this blog, plastic pollution will be the focus pollution source.

Plastics are being increasingly produced worldwide, with global production of plastics exceeding 300 million tonnes each year since 2014! [3] Due to plastics material durability, excessive maritime use, low-recycling rates and insufficient waste management practices, much of the world’s plastics enter and remain in ocean ecosystems [4].

International concern over plastic pollution in the oceans and freshwater systems has received significant attention from the media. There has been a huge increase in political and public concern surrounding plastic pollution. Nowadays it is seen as serious a threat as climate change [5]. Continued research and increasing understanding and knowledge on the negative effects of plastic pollution has led to a response from the UK government. The UK government announced within the 25 Year Environment Plan to achieve “zero avoidable plastic waste by the end of 2042” [5]. 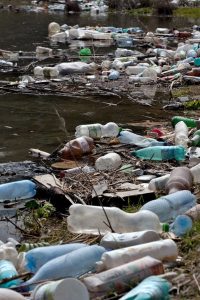 ‘Plastic bottles and garbage on the bank of a river’ by Horia Varlan. Image courtesy of Creative Commons.

Plastic pollution is composed of a wide range of differing organic polymers used widely across the world. There are approximately 50 different basic types of polymers included in 60,000 plastic formulations [6]. Plastic particles are classified based on their size in the environment; they can vary in size from microscopic to metres in size. The classification can vary between different reports and studies, but for this blog they are classified as: nano (<100 nm), micro (0.0001-5mm), meso (5-25mm) and macro (>25mm) [7].

Sadly plastics are found in both benthic (sea floor) and pelagic (open ocean) habitats, and are distributed across all oceans.  Once deposited within the environment, plastics start to degrade and break into fragments. This makes removal and identification of the plastic particles difficult, particularly those smaller size fragments. 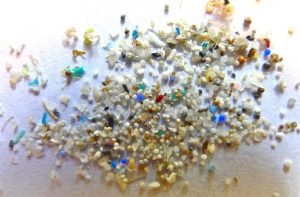 Microplastics feature in our everyday lives, and many of us don’t even know we are using them. Examples of primary sources of microplastics include: scrubbers in cosmetic and cleaning products, manufactured pellets used in plastic production and feedstock, microbeads from cosmetic face scrubs and toothpastes. Secondary sources include: breakdown of larger plastic items such as fishing nets, industrial raw materials, household items, films, line fibres and degradable products designed to break up and fragment in the environment [10]. 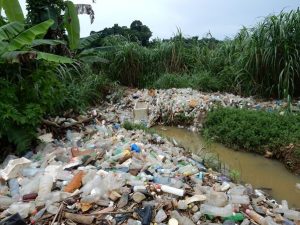 Sources of plastic pollution in rivers

Despite the increased notoriety, plastic toxicity and contents in UK rivers receives less attention, in comparison to oceans. Rivers are a crucial area of study: an estimated 80% of plastic pollution that reaches the oceans enters the environment from inland water systems and (predominantly) rivers [12]. Sources include urban landfill, industrial plantations, littering, waste treatment works and sewage sludge runoff [12].

Plumbing misconnections are a rarely mentioned, but are a significant source of plastic pollution. Misconnections are when drainage pipes containing foul water are unintentionally connected to surface water rainfall-only drainage systems [13]. This leads to contaminated water flowing into the nearest freshwater system without treatment. It is estimated that one in five properties have a plumbing misconnection of some kind, stemming from washing machines, dishwashers, toilets, and even an entire house [13]. Other plastic sources stem from fishing and dumping of equipment from ships [12].

The effects of plastic pollution

The annual transfer of plastics to the oceans from rivers has been estimated between 4.8-12.7 megatons [14]. This significant pollution issue has prompted scientists and charitable organisations to press for policy changes, including classifying plastic waste as hazardous to ecological and environmental health [15,16].

Plastics have a wide range of effects on freshwater and marine ecology. The most obvious and visual being animal entanglement, choking and strangulation within a plastic product [17], and the worrying ingestion of microplastic fragments in organisms such as; molluscs, fish and crustacean species [18,19].

The microplastic fragments cause gut blockage and physical injury, however they can also alter species behaviour, e.g. through their energy levels, reproduction and growth rates [19]. An example from Wright in 2013, found that microplastic ingestion decreased energy reserves and reduced feeding activity in freshwater worms [20]. In addition, ingested microplastics have potential to be transferred up levels throughout food webs to predator species such as birds or fish [20].

Also, research is highlighting potentially harmful chemicals that can leach from the ingested plastics and can end up in body tissue of freshwater organisms [21].  An example from Rochman in 2013, found that fish exposed to polyethylene microplastics with pollutants absorbed from the freshwater environment accumulated the pollutants physically and suffered liver toxicity [22].

Plastics may also be used as part of casing like structures for macroinvertebrate species. For example, Greenpeace in 2019, found that caddisfly larvae, which usually construct protective cases from small debris such as sand, decaying leaves and twigs, where using microplastics in these casings as well [23]. Further research into the physical effects of and exposure to plastics effects on marine and freshwater life is needed. However, it can clearly be recognised that plastic has substantial impact of freshwater ecology and the environment, which is likely to persist for a considerable time. 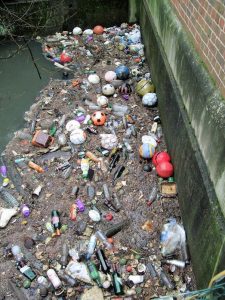 At the Severn Rivers Trust promoting and improving environmental health, especially water quality is a main priority. Another key aim is to engage the local community in environmental projects. Community engagement is executed all around the Severn Catchment. For example, along the River Stour in the heart of the Black Country, volunteers contribute in the form of litter picking, helping to reduce plastic pollution along an urban river system. A Facebook group has been set up with information on local community projects and further information, which can be found HERE.

Thank you to Tom Hartland-Smith for the information provided.