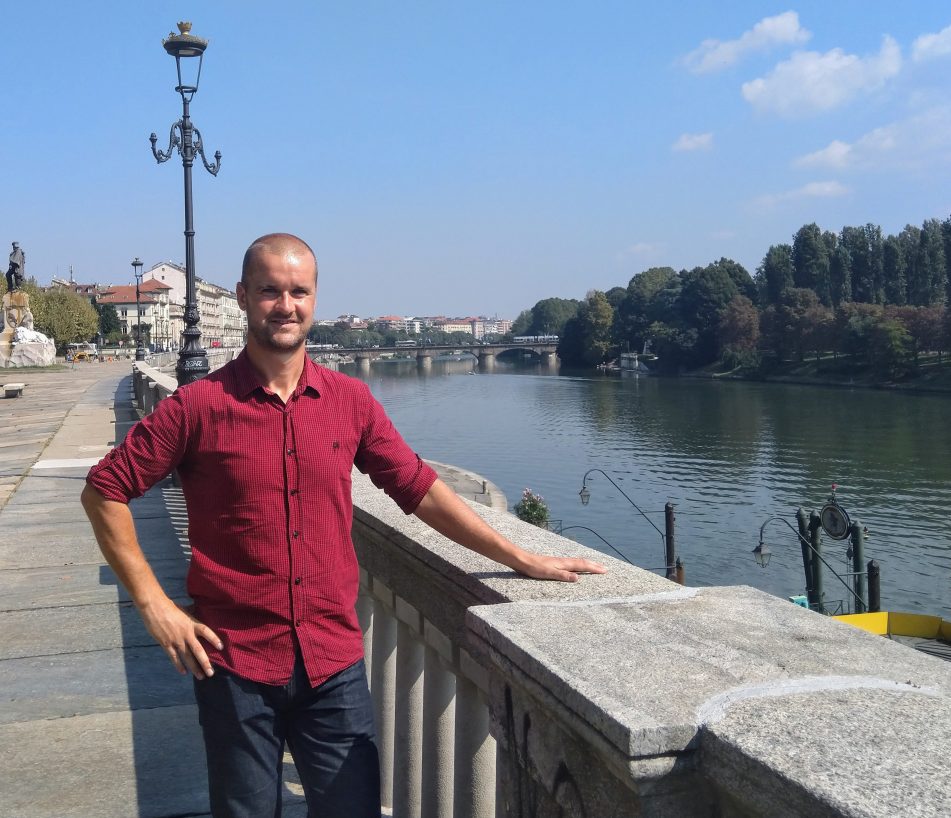 Almost two years on and Pete is on the verge of completing his Level 3 apprenticeship. In his final blog he reflects on some of his most memorable experiences during his time working on the Unlocking the Severn project.

I’ve been working on the project as the Waterways Environment Apprentice since September 2019. I applied for this role two years after I decided to change my career path. In the past I’ve had many roles like running my own driving school and working in the retail sector. I have always been interested in wildlife and rivers growing up and, after completing a level 2 apprenticeship in horticulture, the opportunity to learn more about working in and around our waterways seemed like a perfect next move in my pursuit of a career in conservation. The Unlocking the Severn project was an extremely exciting prospect, and I have always had a passion for the fish species of our rivers.

My main interest lies with the wildlife that inhabits our rivers and canals. At a young age I was interested in fishing and wildlife spotting. In recent years I’d become concerned about the health of our rivers after reading troubling articles about pollution, and how only a handful of UK rivers are in good overall health. There are also the declines in our wildlife; animals like water voles, some species of bat, European eel and many others have seen huge declines in recent years, and they are clearly in danger of extinction if rivers continue to deteriorate in health. Some fish species like burbot and Atlantic sturgeon are now all but extinct in the UK, and reintroduction efforts are underway.

Getting to know the Canal & River Trust

As an employee at the Canal & River Trust I’ve learned so much about the vast canal network stretching across most of the country. Although I was unable to visit many of these due to the pandemic, I was able to attend an induction in Birmingham and was shown the Roundhouse restoration. I also worked with some volunteers on the Gloucester to Sharpness canal. I’ve heard about many impressive Canal & River Trust assets like the Pontcysylite Aqueduct in northeast Wales, the Anderton Boatlift in Cheshire and the Foxton Lock Staircase in Leicestershire, and I plan on visiting some of these when I’m able.

My colleagues at the Canal & River Trust have been very helpful allowing me to shadow them and learn more about what we do as a Trust. I have accompanied another colleague who has led volunteering sessions building a newt pond at Saul Junction, which has already shown evidence of breeding great crested newts. I’ve also assisted in collecting water samples during recent dredging works in Gloucester Docks. I have had so much support from my colleagues here and I am extremely grateful to them for being so welcoming and supportive during my apprenticeship.

Working with partners at the Severn Rivers Trust

Early on in my time as a Waterways Environment Apprentice I was introduced to staff from one of our project partners the Severn Rivers Trust. I was lucky enough to be invited to several practical days installing river revetment, planting trees, and conducting electrofishing and riverfly kick-sample surveys. 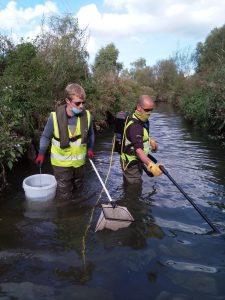 These experiences were not only enjoyable, they helped me realise just how many problems rivers face. Not just run-off from fields and roads, but also many rivers in the uplands have been straightened in the past, removing all their natural features like meanders and gravel banks. Many areas of uplands are now arable fields or pastures, whereas in the past the surrounding land would have been made up of mostly woodland.

This lack of canopy and root systems mean rainwater is reaching the river catchment very quickly, and that is causing problems during times of heavy rainfall. The water is eroding the banks and flowing straight into the middle and lower course of the river, rather than being held up in the catchment for longer.

Natural flood management techniques and “Slow the Flow” are big topics in river conservation, and I’m pleased to see that awareness of this is on the rise.

My college is the Taunton and Bridgwater College at Cannington in Somerset, but my apprenticeship coursework has mainly been assigned to me to be completed remotely, and thanks to technology most of my training, exams and observations were able to be completed online. I’ve attended the college for two week-long residencies to undertake face-to-face training and classroom lessons.

My assessor, Simon, has also been out to visit me on site in Worcester to assist, guide me and to carry out practical observations. Although my interest lies within wildlife habitats, I’ve also enjoyed learning about flooding, health and safety, water-based assets, drainage and pollution. I’m due to complete my End-Point Assessment in the next few weeks.

My most memorable experiences

There have been so many enjoyable days during my time on the Unlocking the Severn project. I have had the pleasure of setting up a volunteer group for Diglis Lock Island in Worcester – the Green Team. The island, which is hosting many events during the project, had suffered from a lack of maintenance in recent years. The newly formed volunteer group very quickly got to grips with the island’s vegetation. The group have carried out important work like coppicing, hedge-laying, invasive weed control and woodland management. The volunteers have also carried out important work keeping the pathways and emergency access staircases clear, and keeping vegetation down around the island’s historic workshop.

The most enjoyable experience for me was when the volunteers and I cut and raked a grass meadow on the southern tip of the island on a warm day last October. This annual cut is so important for meadow species like wildflowers, reptiles and field voles. During the cut we saw several voles, as well as evidence of otters and moles.

Cutting and raking the hay meadow on Diglis Lock Island.

Another memorable day was when I assisted Lisa Barlow and Ed Noyes at the Severn Rivers Trust. We planned a revetment project on the river Corve near Ludlow in Shropshire. This involved coppicing nearby willow and alder trees to collect materials to construct a defence for an area of riverbank which was being eroded during flooding. By securing the stakes into the ground and pinning in brash bundles we were able to protect that area of the bank. This will allow new willow trees to set root and therefore offer support for the riverbank for future years. Lisa’s beautiful homemade lemon drizzle cake was also a highlight from this day!

I have also enjoyed assisting in the project’s Severn Series. This was a series of online talks delivered last winter by project staff about the river Severn. I delivered a talk titled Fish Species of the River Severn. I was assisted by Ed Noyes, Fisheries Officer at the Severn Rivers Trust.

Although initially nervous about delivering a talk in front of so many (around 100 people), I really enjoyed the experience and it helped me gain confidence. We had some lovely feedback from attendees, the audience seemed to enjoy the talk, and we had lots of interesting questions at the end. People do seem genuinely intrigued by the world under the surface, and it seems we generally know less about fish than we do about the UK’s birds or mammals for example. I’m delighted that our project can offer one of the few places in the country where members of the public are able to witness fish migrating in their natural environment in the viewing gallery at the Diglis fish pass in Worcester.

A number of experiences to be grateful for..!

There have been many other experiences during my apprenticeship; including assisting with the delivery of riverfly surveying classes, assisting with monitoring shad and salmon during the migration season, tree planting in the Severn uplands, recording wildlife on the Severn by using trail cameras, catching invasive signal crayfish with the Malvern Crayfish Group and conducting fish surveys using electrofishing. With this wealth of experience I’m now in a great position to work in river restoration as a project officer. I am pleased to say that I have recently been successful in applying for a role as a Project Officer for the Gloucestershire Wildlife Trust on a canal restoration project.

I’m certainly looking forward to my next role and the challenges that come with it, but I’m going to miss my colleagues at the Canal & River Trust and the Severn Rivers Trust. I will also miss all the amazing volunteers that I’ve worked with, especially the Green Team on Diglis Island. I will continue to support and follow the Unlocking the Severn project, and will return as a volunteer once I’m settled into my new role. The project has recently taken on two more apprentices: Corinne as an Events Assistant Apprentice and Aaron, the new Waterways Environment Apprentice. The project has provided me with a great atmosphere to learn. The experiences have been invaluable and the support I’ve received has been fantastic. The new apprentices are in good hands and I’m sure they’ll enjoy their time with the project and their amazing project partners.