A new home for sand martins at Diglis Island 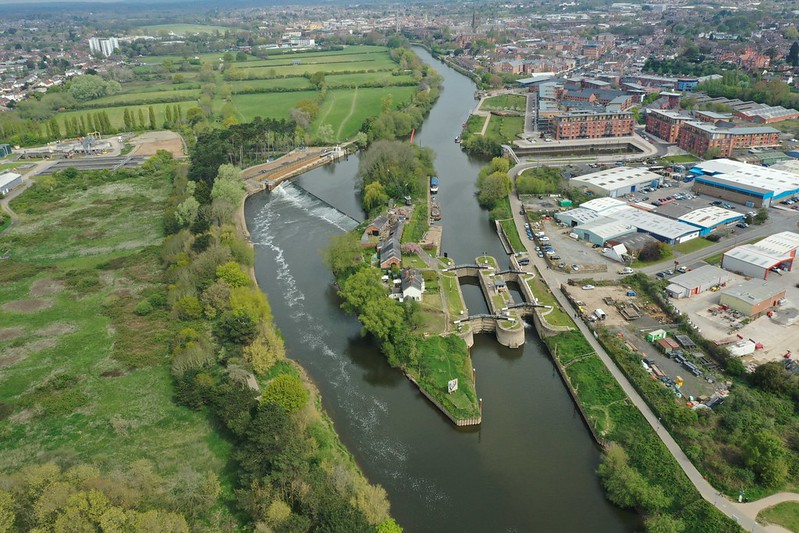 Have you spotted the newest addition to Diglis Island?

If you’re walking past the Island and you look just above the old barge, to the right of the slipway, you may notice a large box perched overlooking the water. This is new luxury accommodation, designed specially for sand martins!

Sand Martins, Riparia riparia, use the River Severn as a navigation pathway when migrating. We have noticed that a colony of sand martins have chosen Diglis Basin as a frequent nesting site. However, this site is actually quite a hazardous spot for the birds. Their nesting spots are located in drainage outlet pipes and during heavy rainfall or flooding, the nests get destroyed. This has become only too apparent with the recent flooding along the River Severn.

Instead, we’re giving the birds a new home! Unlocking the Severn have been working with the local RSBP and Worcester Environmental group to build and install a sand martin colony box on the east side of Diglis Island. Aaron, our Waterways Environment Apprentice, was in charge of the project. Listen to him explaining a bit more about the box below.

Sand martins are a member of the swallow and martin family. They are Green on the UK conservation status, meaning they’re in the least critical group. Despite this, we identified a local population that would benefit from an alternative nesting site. The box we have designed is above the flood plain, providing the colony of sand martins an enhanced chance of reproduction and survival over the nesting period.

The box is designed to resemble and artificial sand bank that the sand martin would excavate to nest in. The box is made of two timber lattice frameworks that are fixed together. Inside, nest box tubes have been slotted into place, and these line up with the holes drilled on the front of the box. The tubes inside the box are made from recycled materials and are essentially a tube with a nesting area at the back. The tubes have been designed with a slight incline in them to resemble how the sand martin excavate the cliff face which is at a slight angle so water doesn’t pool in the tubes (clever little birds!). 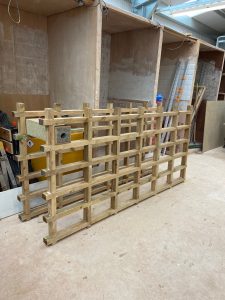 The wooden lattice framework that forms the inner structure of the nesting box. The nesting tubes are then slotted in, as shown in the top left corner of the box.

Punching holes in the outside of the box. These holes will provide the entrance to the nesting box.

The inside of the box is insulated to keep the tubes at a reasonable temperature throughout the summer when they’re nesting. The face of the box is covered with sand to resemble a sand bank and some of the tubes are filled with sand so the sand martins can imitate their natural behaviour in excavating their nesting sites.

Video of the nesting tubes being fitted inside the box:

There is more information on sand martins on the RSPB website Sand Martin Bird Facts | Riparia Riparia – The RSPB and Sand Martin Life Cycle – The RSPB.