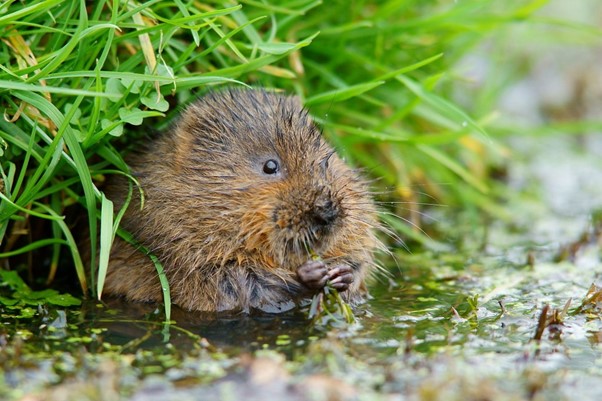 This blog has been written by Rebecca Jordan, a volunteer for Severn Rivers Trust and Unlocking the Severn.

Water voles (Arvicola amphibius) are small mammals that inhabit riverine landscapes, such as the banks of slow-flowing rivers, reedbeds and marshes [1]. They are often confused with the common rat, being a similar colour and size, but water voles tend to have rounder muzzles and hairy tails, unlike the narrower faces and bald tails of rats. If you’re trying to spot a water vole in the wild, you should keep an eye out for burrows that are between four and eight centimetres in diameter, cylindrical tic-tac shaped light green or brown droppings and larders of cut grass and reeds [2]. 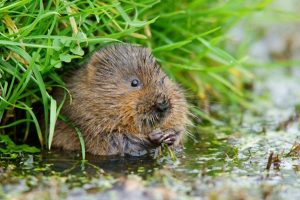 Globally, they are listed by the IUCN as ‘least concern’, however, locally in the UK they are considered to be highly threatened. Their populations have taken a hit, vanishing from 94% of their historic sites [1]. This decrease is thought to be the result of a couple of threats: the American mink, and habitat loss.

The American mink (Neovison vison) is an invasive species in the UK, and it threatens the water voles’ population on a scale much greater than any native predators do. The mink can hunt the small mammals both when the water voles are active (above ground, carrying out foraging activities) and inactive (sheltering in their burrows) because the American mink is able to squeeze into their burrows [2]. Some studies have suggested that water voles may struggle to perceive the dangerous presence of the American mink, due to not having evolved alongside them as a predator [3], but this requires further research. 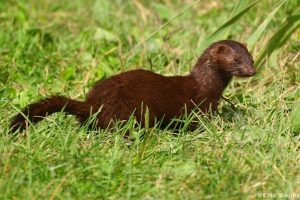 Habitat loss is brought about through human management of rivers, with vegetation clearance, dredging and the channelisation of rivers and ditches causing their burrows to be destroyed and the resulting in the loss of waterside plant species which these little vegetarian mammals feed on.

There are no other rodents in Britain that fill quite the same niche as water voles. They are classified as ecosystem engineers, thanks to their ability to modify the landscape around them, enabling it to support higher species diversity. For example, through the changes they make to vegetative structure by grazing, they can encourage more diverse wildlife to thrive there. The burrows they dig out for their own shelter can also provide a safe haven for other mammals, as well as amphibians and reptiles too. Their burrows sometimes weaken the ground around them which results in sliding and collapsing of earth, and this can lead to the formation of little berms on the bank and minor water diversions, providing a more diverse riparian landscape to support enhanced biodiversity. The slipping of these burrow areas can also make the riverbank easier for other creatures to tunnel into, like kingfishers and sand martins. 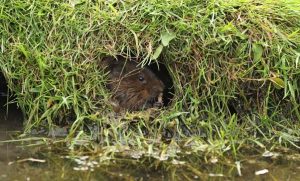 The shy and secretive water vole, by Mark Abel. Courtesy of Creative Commons.

Water voles are also ecosystem builders because they act as a food source for predatory species such as owls, otters and snakes, making them a valuable component of the food web. So, it is clear that water voles, beyond their intrinsic value, provide important ecosystem services too.

Studies have identified some landscapes and habitat types that can act as lifeboats for water vole populations as they try to thrive in the face of their challenges. One study revealed that water voles in Polish post-glacial landscapes rely upon urban lakeshore areas as refuges free of American mink populations [4]. They also found that small midfield ponds that were a significant distance from any large lakes or rivers acted as refuges too, because they were not large enough to support mink. The urban presence of water voles is because mink tend to avoid areas where they feel threatened by human presence, on top of the fact that urban riparian areas tend to have lower species richness in terms of amphibians and fish variety, so the presence of just one of their favourite foods is not quite enough to tempt them [4].

The findings from this study in Poland are backed by a study published this year on the presence of water vole populations in UK cities [5]. Of the sixty-four UK cities included in the survey, twenty-four had records of water vole presence over the last decade, suggesting that urban areas may be a much more important habitat for water vole populations than previously thought [5]. Beyond just living in urban riparian habitats, water vole populations have been found recovering in parklands and gardens in Glasgow [6]. In fact, in this case, water voles are far more likely to be found over five-hundred metres away from the nearest river, suggesting that American mink, who mostly stay within the riparian zone, could be keeping them away.

The implications this has for water vole conservation seem almost counterintuitive, after all, the habitat loss and fragmentation resulting from urbanisation was a factor in their decline, although not to as large an extent as changes in agricultural land and river management and the introduction of mink. However, with careful management, maybe urban populations of water voles could make a significant difference in restoring their historic population numbers. In cases like Glasgow’s water vole population, some management steps that are suggested include less frequent grass cutting and a greater recognition of the presence of water voles in urban planning [6], but barriers to success like mortality caused by domestic cats will also need addressing if they are going to stand a chance.

Another potential refuge habitat for water voles are reedbeds. Studies have found that reedbeds are less commonly occupied by American mink, and that there is a positive correlation between distance of the reedbed from the main river channel, and water vole population size [3]. The reasons for this are not totally clear yet, but it could be that, as is the case of the water voles in Glasgow, the mink tend to remain within riparian boundaries, conserving their energy by keeping to the main river corridor where the highest density of food is likely to be found, so the water voles go further out to avoid contact with them. This is supported by a finding that 60% of the foraging activity by American mink in a south-west England study area took place within 10 metres of the river channel [7]. Reedbeds were also found to be a useful spatial refuge for not only water voles but wetland birds too.

Re-introduction can be a highly effective way of restoring declining species populations to stable levels. It involves a lot of careful planning and research to ensure that introduced water voles will survive and thrive at the proposed release site. Another factor that also requires careful consideration is disease screening. Water voles raised in captivity have been known to carry infectious diseases such as C. minutus and Y. enterocolitica [8] so it is imperative that they are screened for such diseases prior to their release, and for them not to be released if it turns out that they are infected. Releasing infected animals would not only put extant water vole populations at risk (as well as other species) but would also limit the chances of the re-introduced water vole population being successful [8]. Thankfully, experts in the field of conservation and re-introduction are mindful of these issues, and re-introductions are handled with great care. 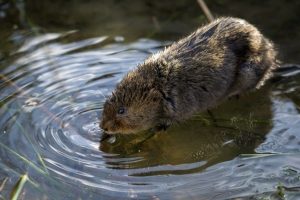 In the Summer of 2020, Severn Rivers Trust worked alongside the Environment Agency to facilitate the release of over 100 water voles into the Rea Brook, a tributary of the River Severn. This represented a huge step forward for biodiversity, with water voles being thought to have disappeared from the Rea Brook in the 1980’s, falling foul of the threats described previously. It is hoped that their reintroduction will have knock-on positive impacts across the local ecosystem, encouraging the return of wetland birds and plant species.

Speaking to Caroline Savage of the Environment Agency, who initiated the Rea Brook’s water vole reintroduction project, she told me that she is now working on re-enhancing ditches and a pond at Attingham Park in Shrewsbury. This pond will enhance the connectivity of the riverine landscape along this portion of the River Severn and River Tern, and it is anticipated that a similar water vole reintroduction program can be carried out there within the next couple of years. With projects like these underway, it is hoped that water voles might still have a thriving future ahead of them in the UK.

Thank you to Katie Piercy of Severn Rivers Trust and Caroline Savage of the Environment Agency for their help and expertise.