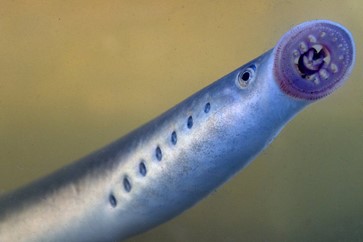 Written by Aaron Batsman, Waterways and Environment Apprentice for Unlocking the Severn.

Introduction to the Lamprey

Lamprey are a descendant of the jawless fish family that pre-dates the ancestors of true fish that we see today. This primeval creature has no proper bones and its appearance resembles that of an eel. Despite their similar body shape, they are not closely related. Lamprey are in fact more closely related to sharks!

An adult lamprey’s mouth is circular and filled with backwards facing teeth. Their round mouths act like suckers, which allows them to cling to the bottom of a waterway as well as latching onto larger fish to feed.

There are three lamprey species in the UK, the Brook Lamprey, the River Lamprey and the Sea Lamprey. To start, we will take a look at the smallest of the lamprey, who has a slightly different use for its sucker mouth other than feeding. 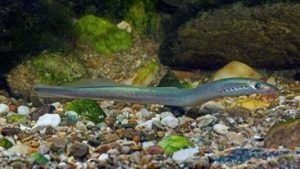 Brook lamprey spend their lifecycle in rivers and streams and do not migrate to the ocean to breed. Once the lamprey reaches maturity, its digestive functions stop and it cannot feed. They will then migrate upstream to spawn.They spawn in shallow water between April and June, this is the best time to try and spot them as they usually spend a lot of their time buried in sandy sediments. During their spawning months, the brook lamprey use their circular sucker mouths to build nests out of rocks where their eggs are deposited.

Only feeds in larval form by filtering detritus 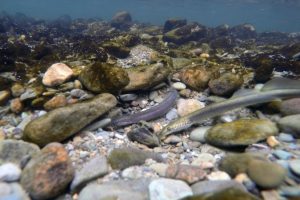 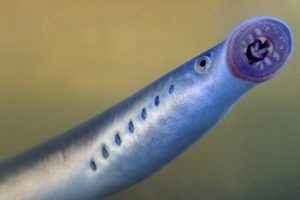 The river lamprey is a larger species of lamprey in comparison to the brook lamprey. This terrifying looking creature uses it sucker like jaws and backwards facing teeth to latch on to fish and feed from it. Ripping away chunks of flesh and engorging itself on the fish’s bodily fluids. Nice!

Up to 50cm adult length

Parasitically feed on river fish in particular herring and flounder

The last and largest of the lamprey found in the UK is the sea lamprey. Similarly to the river lamprey, sea lamprey use their specially designed disc shaped mouths to attach themselves and feed off marine fish. Sea lamprey aren’t fussy eaters and feed on any fish, even large basking sharks have been found with lamprey attached to them.

Other comparisons can be draw between the sea and river lamprey. They both migrate from the sea to freshwater environments to spawn and their young, in the larval stages remain in the freshwater for a number of years before returning to the ocean. The main difference between the sea and river lamprey is the time spent in the marine environment, which tends to be considerably longer for the sea lamprey.

Up to 1m adult length

River and sea lamprey both travel from the sea to freshwater rivers to spawn. The restriction of this spawning migration by man-made objects, such as weirs has and is continuing to impact on these species of lamprey.

These impacts mentioned above have lead to a significant decline in populations of the sea, river and brook lamprey. This decline in number of lamprey means they have been placed as rare under the European Commission’s habitat directive and sea and river lamprey are named in the UK Biodiversity Action Plan. The lamprey are also listed on the International Union for Conservation of Nature (IUCN) Red List of Threatened species. Being placed under such directives is a step in the right direction for the lamprey. Measures are put in place to attempt to restore populations of these rare species.

Other attempts are being made to help the lamprey by addressing the physical barriers that prevent their migration up river. Check out the Unlocking the Severn webpage (https://www.unlockingthesevern.co.uk/) which is just one example of a project that aims to provide passage for fish past obstacle such as weirs. Though this project is aimed at the twaite shad it will also benefit countless other species of fish in the River Severn. A similar project, focussing more on lampreys, saw the installation of ‘lamprey tiles’ on man-made barriers to allow the lamprey to use their sucker mouths to climb up the barrier and proceed upstream (See https://www.bbc.co.uk/news/uk-england-34149881 for more information).

– Lamprey are prehistoric creatures that are under threat from humans

– There are 3 types of lamprey found in British waters: Sea, river and brook lamprey

– Lamprey are now recognised as being under threat and rare

Thank you for reading my blog post. If you were at all like me and didn’t know what on earth a lamprey was I hope this has given you an insight into the rare and primeval species that dwell in our waters.