How counting shad kept me sane! 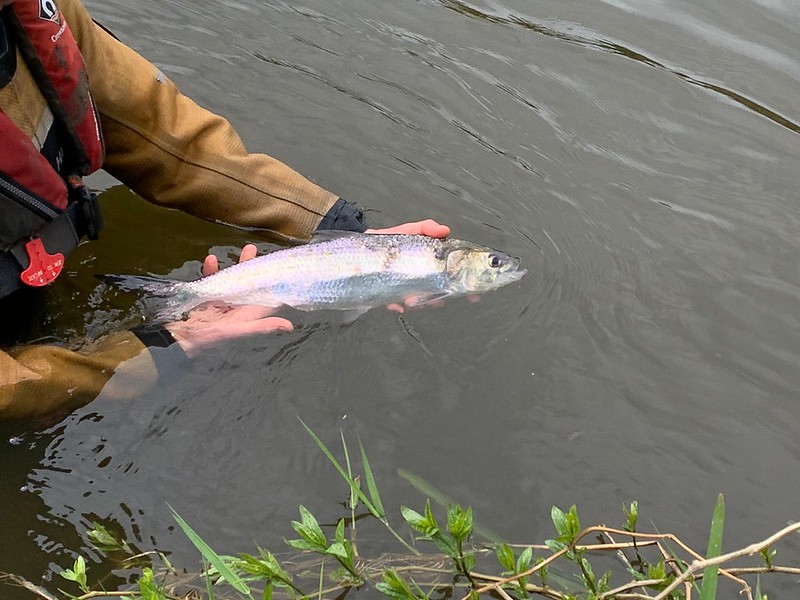 I am a fish nerd. I have been obsessed with fish since early childhood days spent angling with my Dad, and the breath-taking gift of a tropical aquarium for my 12th birthday. My teenage years were spent either outdoors in nature, usually by water, or indoors tending to my growing collection of fish tanks, hosting breeding populations of various colourful species. I also used to devour Sir David Attenborough’s TV shows, watched with my family in the evening, plates of dinner in our laps. I knew from an early age I wanted to be conservation biologist.

In the forty years after that first fish tank, I passed my O levels, failed and passed my A levels; graduated with a Zoology BSc; volunteered for and ran conservation projects in Greece and Sri Lanka; fell in love and got married; got my Masters degree; was recruited by the Marine Conservation Society (MCS); raised two delightful children; studied for my PhD; ran loads more overseas conservation and research projects with MCS; and eventually signed up as a volunteer for the Severn Rivers Trust in early 2020.

I had read about shad, but never seen one in the flesh. I was stoked at the prospect of getting to see this remarkable fish fairly close to my home town of Ross on Wye. On my first volunteer trip in mid-March that year, when I first met Rachel and Peter at Diglis weir, we scoped out shad spawning sites along the Severn in preparation for installing acoustic monitoring devices – it was going to be an exciting and fascinating spring.

The world stopped, and lockdown stifled any prospects of seeing shad that spring. All my UK and overseas research fieldwork with MCS was put on hold. Along with everyone else in the country, we sat tight and waited to see what would happen. In Ross we are lucky, the countryside is on our doorstep, and those early lockdown walks with our two beautiful cockapoos were blissful – no car noises from the A40, no planes overhead, just unbridled nature singing at full throttle – I hadn’t experienced that before – it was euphoric above the creeping paranoia.

But as the months wore on, my working days, shackled to my laptop in endless Zoom meetings, became more and more dull and repetitive, and I noticed that my motivation was rapidly deteriorating. The nature therapies of daily dog walks and weekend fishing sessions on the Wye were essentially fire fighting my growing mental health crisis. My fragility was further compounded by Dad’s sudden and rapid descent into dementia 180 miles away at his home in Cornwall. There was a nagging feeling of hopelessness and uselessness every time we spoke on the phone and I noticed his grip on reality loosening.

I managed to visit my Dad one last time for a week in October to give his wife a break. He gave me all his fishing tackle – we knew he was nearing the end, but we didn’t expect it to come so soon. In December he was admitted to hospital after a fall. There he contracted Covid-19, which eventually took him at the end of January, just after his 82nd birthday.

In February, against the backdrop of the ongoing second Covid-19 wave, I was numb. I struggled through the funeral, and by March I was completely unable to focus on my work, my family, anything really. Fishing season was over, it was cold outside – what on earth was I going to do?

Then Rachel’s emails started coming through – shad season was rapidly approaching and lockdown restrictions were due to be lifted – who wants to volunteer for Unlocking the Severn? The fish nerd in me re-awoke – I had been thrown a lifeline!

I realised I needed to take drastic action to rescue my sanity, so requested a month of sick leave from MCS – my boss was well aware that I was struggling, and agreed without hesitation, which left April free for me to volunteer with the shad. 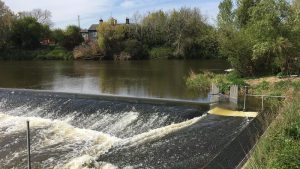 I cannot fully describe how invigorating – liberating even – it felt to find myself standing by the Upper Lode weir at Tewkesbury one sunny, mid-April early afternoon, with Rachel and Peter taking me and a few other volunteers through the recording protocol. There was the glorious river – the sound, splash and smell of the water, the sun glittering and glancing off the surface, a heron patiently waiting for the chance to impale a passing fish on the weir edge, its foot trailing in the flow. I had a datasheet and clicker in hand, and the prospect of seeing my first shad on my mind. I inhaled it all in greedily – I felt good again.

In the following few weeks I was regularly at the weir for shad counts – I chatted with the FishTek guys as they installed the remote monitoring camera over the shad plates (we knew mutual research  acquaintances); I spent a couple of days with the Environment Agency staff and the University research teams as they trapped and tagged shad, discussing their findings; and I chatted to curious members of the public, answering their questions about all things shad. I was back in the field doing what I signed up to do as a conservationist – research, conservation and outreach in the field – I had at last returned to my natural habitat. My first shad sighting was over in seconds – but is burnt bright in my brain. A big female, the sudden, sliver-surging determination, the rush, wake and mighty power of a fish heading fast upstream, doing what a fish needs to do – magical. 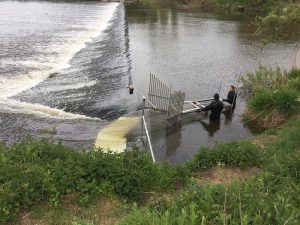 As it turns out, the wet weather and river levels were against us, and while I counted many migrating shad in fits and starts, I didn’t see the spectacular migration runs of hundreds of fish each day that I had been told about – that’s something to hope for next spring. Of course, it wasn’t just the volunteering that helped retain my sanity. I enjoy the love and support of my beautiful family and our crazy, cuddly cockapoos; I have the most kind and considerate work colleagues; I took a course of grief therapy on Zoom with a lovely counsellor in Leeds; and I spent a lot time in nature by the wonderful River Wye, but it is without question that the shad and volunteering for the Unlocking the Severn project played a major role in my recovery. I will always be thankful for that.

I am already looking forward to getting back to the weir for next year’s big migration – maybe see you there?!