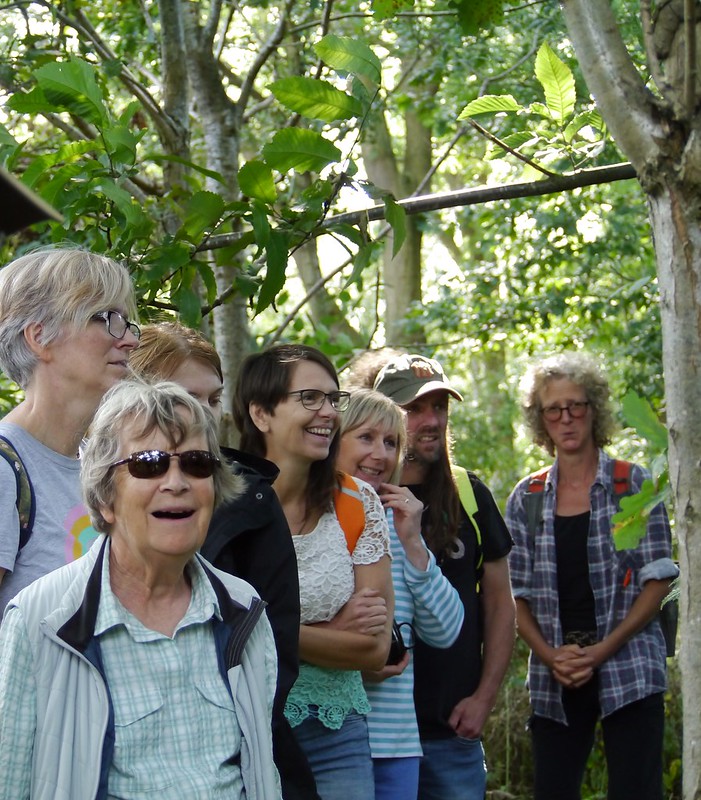 On one sunny Saturday in September we learned how to survive in the wild! Alright not quite zombie-apocalypse style, but, in the capable hands of Eric from Wild Food UK, we were led on an exciting foraging tour around Diglis Island.

I started as an apprentice for Unlocking the Severn over the summer, and during the last three months I’ve spent a fair bit of time on Diglis Island in Worcester. It’s where our project workshop is based, and is a site we are hoping will become an awesome new visitor experience for people to engage with the Unlocking the Severn project. However what I did not realise about the island were just how many plants there were on it to eat!

Now before I go any further I hasten to mention that we were exploring the island with an experienced professional. I’m not about to just go shoving any sort of greenery in my mouth – particularly as we were shown examples of some foliage to absolutely avoid! But we were shown lots of plants which are edible, with often some quite fascinating health benefits too.

We started our tour with an insight into both the history and legalities of foraging. As hunter-gatherers, our ancestors were very good at this stuff. We definitely fell behind with the invention of the supermarket (and later the super convenient food delivery apps!). However many posh restaurant chains now use foraged foods to liven up their seasonal menus. During this chat Eric expressed his dismay at the most damaging aspect of some commercial foraging, where people are sent out to clear whole areas of land to bring back foraged produce. Luckily the Wildlife and Countryside Act 1981 and local bylaws do a good job of protecting our biodiversity. 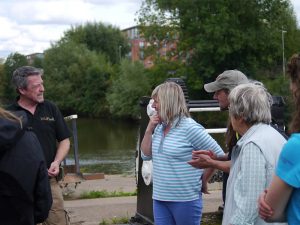 “Always leave half of what you find behind” is a simple yet sustainable mantra for the aspiring forager. Only pick half of anything anywhere, and leave the rest to ensure a healthy population continues to grow. For more wild food wisdom, the foraging code on Wild Food UK’s website is a good place to start.

An Island of Hidden Treasures

On with the tour! We learned a lot about the vegetation growing on Diglis: what to eat, what to stay clear of, and what to make a fire out of. Here are some of the highlights:

Nettles: if weeds had superpowers!

In the plant kingdom, nettles tend to have a bad rep. I’m sure most of you have a story involving falling into a patch of them when you were young. They seem to conjure up one thought and that is “ouch”! But what if I were to tell you that nettle stings actually make you happy? Bear with me on this one.

Research has suggested that three key ingredients make up the nasty cocktail inside stinging nettles: histamine, acetylcholine, and serotonin. Any sounding familiar? Well serotonin is also known as the ‘happy hormone’, because it is produced in our bodies to make us feel good. However when injected into the skin from nettles, it also has an annoying side effect: functioning as an irritant and causing pain!

As well as making you happier (still not convinced?!) nettles have a whole host of nutritional benefits. They are packed full of vitamins, minerals and amino acids; however even more impressively this plant contains antioxidants. Antioxidants are compounds which prevent or delay cell damage, and are therefore important for combating ageing, cancer and numerous diseases. 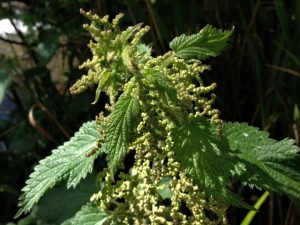 Other promising benefits include a potential hay fever treatment, relief from arthritis, and reducing inflammation. So basically, your Nan’s nettle soup was a good idea after all! I’ve heard that nettle makes good pesto too. However, Eric did warn us that nettles should not be eaten after they have flowered, so cut them back and keep to the young nettles.

Check out Wild Food UK’s guide on the nettle to find out more about this real superfood!

Step aside dock leaf, we’ve got a better natural nettle sting cure. Enter stage left: ribwort plantain! This is a very versatile plant which seems to be anti-everything (in the best way!). According to Wild Food UK it’s an antihistamine, antifungal, antioxidant, and even a mild antibiotic. The antihistamine bit is what makes the ribwort plantain much more effective against nettle stings than a dock leaf, which very likely only works as a placebo. I’d still try the dock too though – the magic newspaper worked well enough on school trips to put some trust in the psychological effect of a placebo! 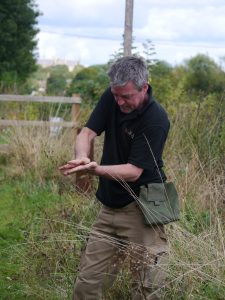 Rubbing the leaves of ribwort plantain provides a good treatment for nettle stings.

We didn’t have to walk far to find our next group of greens. Among the hedgerow we found lesser swinecress (very tasty in a salad, but on it’s own it’s got a fair bit of spice to it!); hedge garlic (not to everyone’s taste but I didn’t mind it too much); and an abundance of hawthorn, which is commonly foraged and good for maintaining healthy blood pressure.

We were also treated to some elderflower mead at this point on the tour. Don’t mind if I do!

Finds in the forest

The Diglis Island undergrowth is where we found most of the goods. Hidden away under the canopy of the northern part of the island were an array of forager foods. These included ground elder, ground ivy and wood avens – the root of which tastes like clove (we all failed miserably at ‘guess the spice’ when we tried it!). 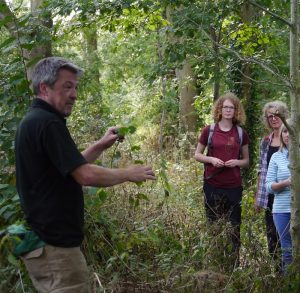 Eric explaining the benefits of ground ivy. The leaves and stem can be used to flavour soup, young shoots can be put in a salad, or this plant use to be used to clarify beer!

We were also told about the wide range of culinary uses provided by elder trees. The flowers for champagne, berries for wine and wood ears for stir fries! Wood ears are a common type of mushroom, often used in Asian cuisine. They actually look and, apparently (thankfully I can’t confirm this), taste like ears!

Lastly our wanderings took us to the northernmost point of the island. I felt sneaky as I knew the wonderfully ripe damsons in the orchard would be a talking point on the tour. I enjoyed watching the rest of the crew get to try the plum subspecies, before picking off a couple myself. The sharp ones are the best! If you’d like to learn more about this relatively unknown fruit, check out this article on the Wild Food UK website.

I also found out that Himalayan balsam (you know, the invasive species we mention a fair bit because it spreads so fast and drives us a bit nuts) is actually edible! Yep apparently young leaves are good for salads, the seed pods have a nutty taste, and the flowers make a decorative addition to your meal.

If we weren’t lucky enough already to have enjoyed a fascinating tour of the island, back at the workshop Eric cooked us a foraging feast! We dined out on a three course meal, which incorporated some ingredients we had foraged at Diglis that day. 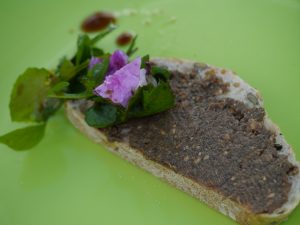 Our mushroom pâté starter, with a salad of Diglis Island greens and edible himalayan balsam flower.

I also changed my mind on mushroom soup, (revelations all round! Or maybe the foraged stuff is just better), because the soup Eric brought with him was very tasty indeed. 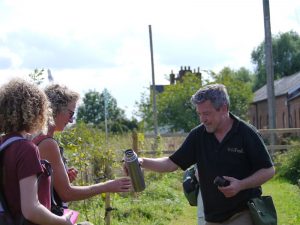 It was so much fun getting to explore our project site in such a unique way. I learned lots about what foods to look out for while foraging, and also what to be aware of! If you would like to learn more about how to book yourself onto a foraging course, check out the dates available on Wild Food UK’s website HERE.