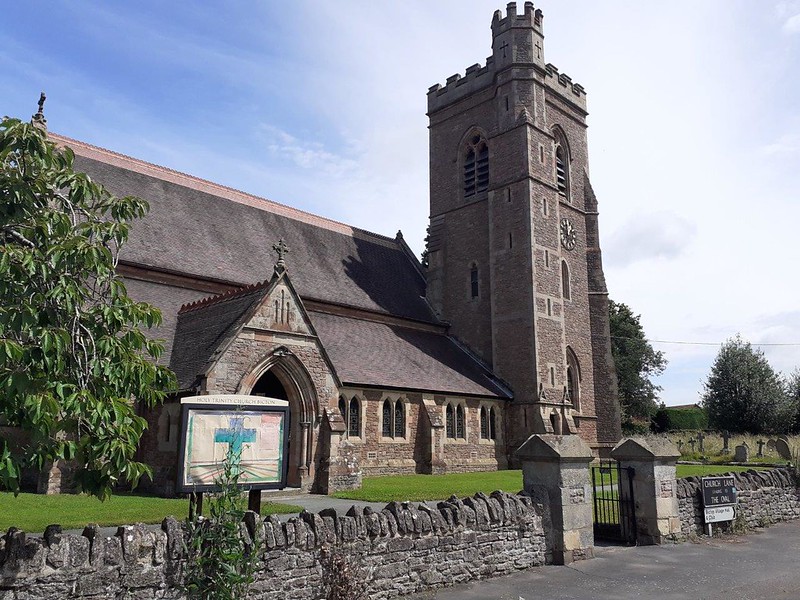 Leg fourteen of our 206 mile collaborative walk from the estuary of the River Severn up to it’s source has been completed!

If you would like to keep up to date with the team’s progress then visit here.

Richard tells us all about his walk below:

My plans to complete this leg of the Sea to Source walk with my family were scuppered when my eldest child was told to self-isolate after a few of his classmates contracted Covid-19 the previous week. This left me with a bit of a dilemma as there was only me able to do the walk. I live over 3 hours away from Shrewsbury and the length of the walk (12 miles each way) meant that I would struggle to complete it in a day. I had a moment of inspiration and decided to take my bike, so that I could bike where possible and use the National Cycle Route to get back to my car after reaching my destination at Bicton Church. 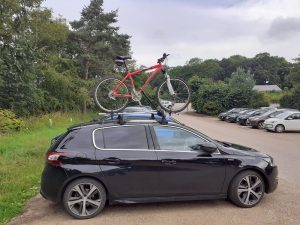 I set off bright and early (6am) on Monday morning (12th July) and travelled the now familiar route from my home in Devizes towards Worcester. It got me thinking about how many times I had travelled this route since starting on the project and how many miles I had covered (roughly 250 trips & 40,000 miles over a period of 3 years). It turns out that it’s a lot! But it’s been worth it for me, as an engineer, to be involved in such a wonderful project.

It was a novelty to continue travelling over an hour north of Worcester to get to my starting point at Atcham Bridge. I decided to park my car at the National Trust Property Attingham Park. I unloaded my bike and set off.

The route took me over Atcham Bridge and down the B4380, before joining the Severn Way public footpath which follows the river as it meanders its way towards Shrewsbury. It was about now that I regretted a) wearing shorts and b) attempting to take a bike with me. The footpath was completely overgrown (see photos below) with a selection of brambles and nettles either side of the very narrow path. The walk was punctuated by regular kissing gates and this bit of the journey turned into a form of extreme exercise: battling my way through the undergrowth while dragging, carrying and lifting a bike over the many obstacles along the way! 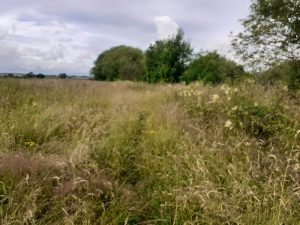 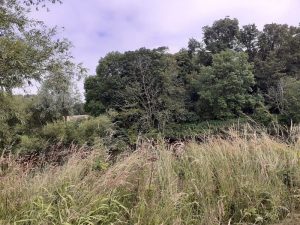 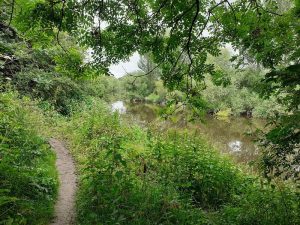 The going got a lot easier after I passed under the A5. There were long sections of open pastureland and lovely views of the river – shingle beaches at the water’s edge with swans and ducks making the most of the tranquility.

When I arrived at Shrewsbury I was greeted by a myriad of amazing bridges that I could study and marvel at the engineering as I passed underneath. 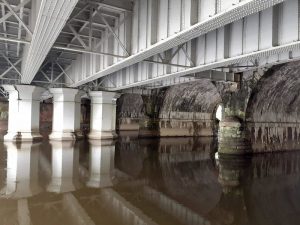 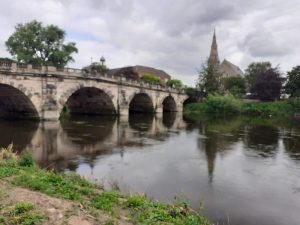 I stopped briefly at Shrewsbury Weir and spotted the fish pass on the opposite bank. It’s good to know that the work we’ve been doing at Worcester to improve fish passage is already available here. 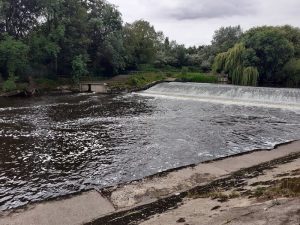 Before setting off I had imagined that the sections through Shrewsbury would be the hardest while trying to walk with a bike. It turned out that this was the easiest section, with the majority of this length being a combined footway and cycle path. Of particular note was the length through the Quarry Parks and Gardens, it looked lovely with hundreds of people enjoying the outdoor space.

There were a few difficult sections with a bike on the far side of Shrewsbury with narrow paths and steep steps that had to be negotiated, before the path returned to open countryside with wide paths across pastureland adjacent to the river (like the photo below). 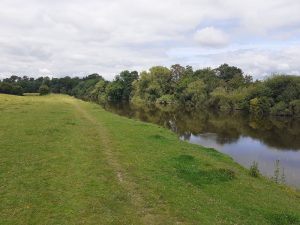 Then before I knew It I had arrived at Bicton Church. It took me around 3 hours to travel the 22km to this point from Attingham Park. 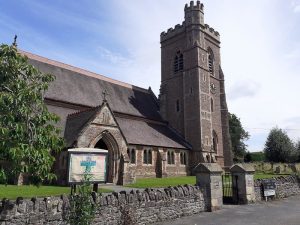 This is when the bike came into its own. Bicton Church is really close to National Cycle Route 81 which I followed back into Shrewsbury. This took me directly back to Quarry Park next to the river, before heading away from the river on the east side of Shrewsbury. Here the cycle route follows the line of the now abandoned Shrewsbury Canal which reminded me of my previous job as an engineer for CRT. At Upton Magna I joined cycle route 45 which took me back to Attingham Park. I managed to get back to the car in around 1 hour 15 minutes. 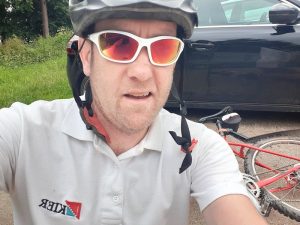 It was a thoroughly enjoyable day walking and cycling though I had plenty of cuts and aching muscles to remind me of the trip! Only 3 and bit hours to get back home, stopping off at Holt Fish pass to see how thing were progressing on the way.