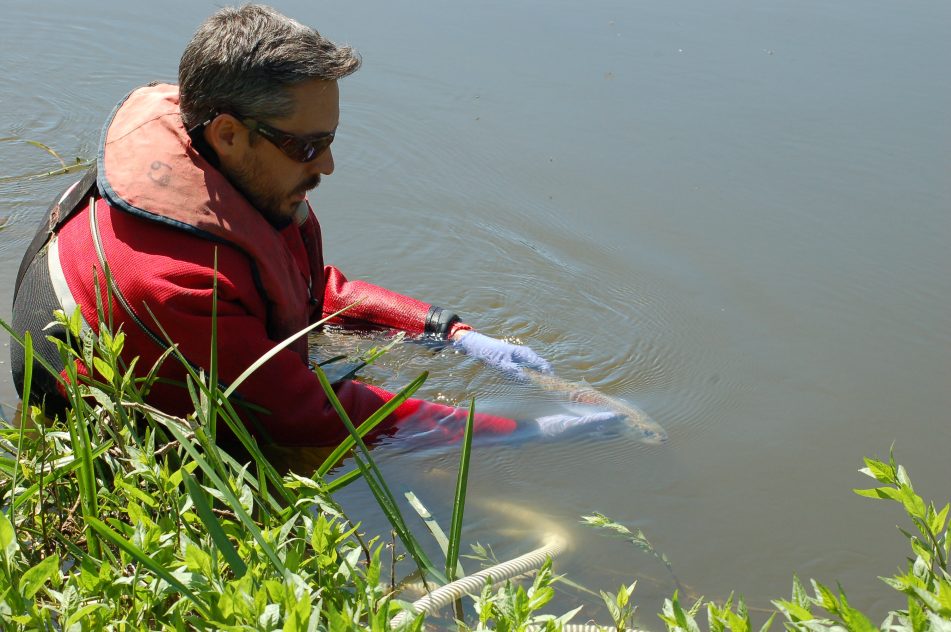 Scientists have had little information on how fish travel within rivers, making it difficult to tackle the devastating 93% decline in monitored populations of migratory freshwater fish across Europe*. Now, for the first time, researchers have carried out high-tech acoustic tracking of five species of fish on the UK’s longest river. This important research has been published in a new report that demonstrates how artificial barriers on the river affect fish.

Loss of access to habitat is a big problem for fish populations in the UK’s rivers. Manmade barriers to migration are one of the key challenges for river fish, along with habitat degradation and loss, over-exploitation and climate change. In this tough environmental context, being able to move between patches of good habitat – known as connectivity – is vital for wildlife. Yet scientists have found it hard to know in any detail how fish travel within our rivers. Until recently, most of what is known about where different species are distributed on rivers came from angling records of fish caught in different locations. However, this does not give a detailed understanding of how individual fish move between these locations.

New research from Bournemouth University and the University of Hull used advanced hydro acoustic technology, implanting tiny transmitters to track individual fish. Every tag emits a unique high frequency audio signal that is picked up by receivers carefully placed along the length of the river. Researchers can track and record the movements of each tagged fish. As a result, they have uncovered important and sometimes surprising insights into how different fish species move up and down the River Severn.

The pioneering research is of huge importance to Unlocking the Severn. This project is working to restore the fortunes of one of the UK’s rarest fish, the twaite shad, by providing fish passage at four big weirs on the River Severn and two weirs on the River Teme tributary. Twaite shad migrate from the sea up the River Severn every spring to spawn. But the population was devastated when weirs were first built in the 1840s to aid river navigation for large cargo boats moving between the new industries of the Black Country and the docks at Gloucester. Unlocking the Severn is being delivered by a partnership of Canal & River Trust, Severn Rivers Trust, Environment Agency, and Natural England.

Twaite shad have suffered the most catastrophic impact from the weirs, but barriers in the river also affect many other fish species. This report provides detailed evidence of how the weirs prevent fish moving freely, which is known to be a critical factor in population decline. Two of the fish in the study – twaite shad and sea lamprey – migrate up into the river from the sea to spawn. The other fish in this research were tagged by Fishtrack: the native pike, introduced barbel, and invasive zander. These three species live all their lives in the river, but each with quite different ecological adaptations. The research uncovered how all types of fish were affected by the weirs and used the time fish were delayed at these structures, as a measure of how disruptive the barriers are for the fish.

Barriers in rivers have a particular impact on the migration journeys that some fish must take to access good spawning habitats upriver, as well as altering the habitat itself. Fish trying to swim up the River Severn for spawning face a series of weirs across their path. This research showed that the cumulative effect of these successive barriers was significant.

“We are very excited to be part of this vital scientific effort to uncover some of the mysteries surrounding the fish in our UK waters and the many threats that they face,” said Mike Morris, CEO of the Severn Rivers Trust. “We must act now to protect the fragile ecosystems and species of the River Severn and ensure that they can be cherished and enjoyed by future generations. Unlocking the Severn will reconnect hundreds of miles of river habitat for fish, a landmark achievement that will boost biodiversity throughout the river system.”

At the start of the research, little was known about how the rare twaite shad moved up the river during their spring migration run. A sample of 184 individuals have been tagged and monitored, of which 78 returned to the river to spawn in a subsequent year. Researchers were able to show that, on average, returning tagged twaite shad spent 30 days in the river, during which time they travelled an average of 133 miles – equating to 4.4 miles per day. The tracking confirmed that Diglis Weir in Worcester is a severe barrier for twaite shad. It blocks their migration journey so that they cannot reach their historic spawning grounds in gravel beds further upriver. The effect of barriers was also shown to be significant for sea lamprey, another endangered fish that travels upriver to spawn. Researchers showed that delays at weirs accounted for an average of 84% of sea lamprey upstream journey time.

The research also highlights some fascinating new insights into very wide-ranging differences between individual fish. For example, the most energetic pike moved a total distance 95 times further than the least mobile pike in the study. The most mobile barbel ranged across 15 miles of river, whilst the most sedate barbel only travelled across a patch of river that was less than half a mile long.

There was also some good news in the research which documented the positive impact of the modification of Powick Weir on the River Teme. In 2018, before the weir was modified by Unlocking the Severn, 0% of tracked twaite shad got over the structure. Whereas in the two years after the weir had been modified for the fish, 56% and 67% of tracked twaite shad that approached the structure passed over it, to reach habitats further upstream.

A fascinating animation has been produced to make the results of this study accessible to a wider audience. Members of the public can see how the different species move through the River Severn and observe the wide individual differences amongst the tagged fish. They can also look at how fish movement patterns change according to the season, how fast the river is flowing, and the river water temperature.

Dr Catherine Gutmann Roberts secured the funding from a British Ecological Society Digital Engagement grant to produce the animation. She explains: ‘My PhD involved tracking the barbel but we were interested to see how the data from all five species fitted together and I wanted to ensure that those that helped collect the data such as anglers and citizen scientists were able to access the results in a way they understood.’

You can see the animation HERE !

*” Globally, monitored populations of migratory freshwater fish have declined by an average of 76% between 1970 and 2016. Average declines have been more pronounced in Europe (-93%)” from THE LIVING PLANET INDEX (LPI) FOR MIGRATORY FRESHWATER FISH – commissioned by The World Fish Migration Foundation