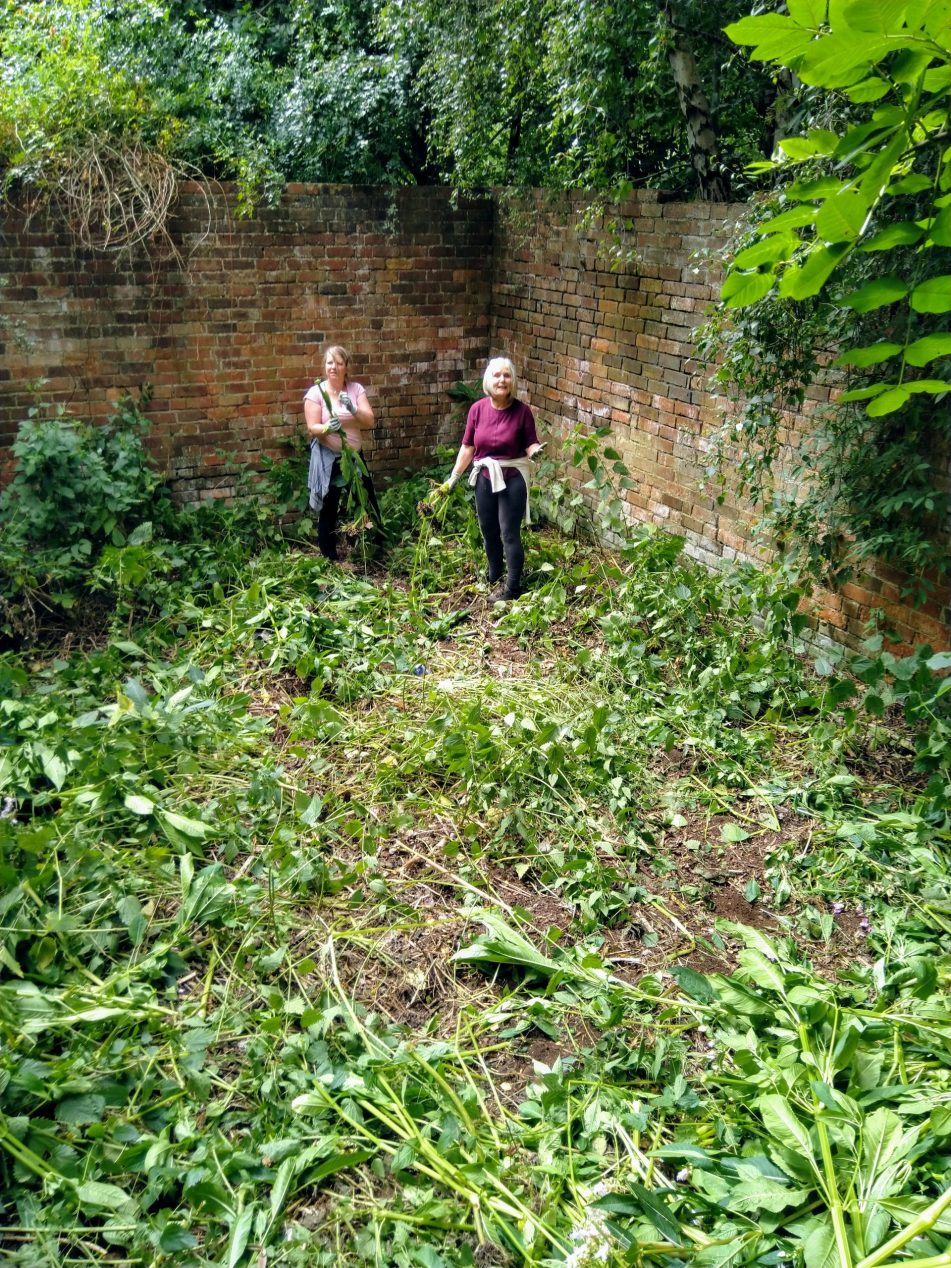 In this blog post, our Waterways Environment Apprentice, Pete, shares his thoughts and experiences to mark the first year of our volunteering group at Diglis – the Green Team. 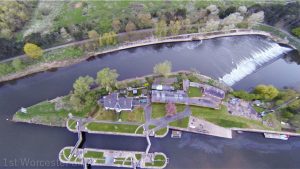 I began my course in September 2019, having recently taken the decision to switch careers to work more with wildlife conservation. After settling in to this role one of my first tasks was to set up a small volunteer group, primarily to carry out vegetation maintenance, but also to open up and maintain pathways on Diglis Lock Island in Worcester. Diglis Island was created in 1844 when the weir and locks were built to raise the water level to allow large vessels to transport goods up and down the river. It is owned by The Canal & River Trust and is home to the old lock building workshop which we have been able to renovate as part of Unlocking the Severn.

There are a wealth of habitats on the island including: an orchard, a hay meadow, hedgerows, a woodland and bramble bushes. In recent years the island’s wildlife habitats have lacked a bit of T.L.C and it has become quite overgrown. With plans for the island to become a visitor destination I was keen to help set up a volunteer work group to take on board this issue.

Volunteers are hugely important to the running of The Canal & River Trust network and volunteering numbers are higher now than they ever have been. I was pleasantly surprised at the immediate responses we received once the advert for the new volunteering positions had gone live in December 2019. We ran two taster sessions in January 2020 to give the applicants an opportunity to come and visit the island for the first time, and meet some of the Unlocking the Severn team. 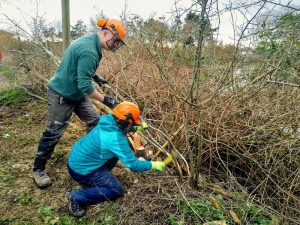 We were so lucky to have six enthusiastic and knowledgeable volunteers with a variety of experiences between them. They’re also all local to Worcester. Two of the volunteers, Hannah and Lynn, can actually see the island from their houses!

We’ve also had some much appreciated help from Connect Worcester, who are a local organisation that provide work experience for adults with learning difficulties. Shortly after the taster sessions we were joined by Alex, a volunteer from Connect, who is a really keen gardener. He has been a great help assisting us with taking out some invasive buddleia and transforming an old wheelbarrow into an attractive planter containing Spring bulbs. He has also assisted by building some bird boxes and coppicing a hazel tree.

For a few weeks early in 2020, the team got started with some really great progress on the island. The volunteers cut the overgrown pyracanths along the workshop building to prevent damage to the old brickwork and windows. The team also managed to get in some hedge-laying and coppicing before the floods set in!

But after a strong start, we’ve certainly been hit with a few big challenges in our first year. Starting with the wettest February on record! This halted construction on the Diglis fish pass for a time, and the river levels were too high for the volunteers to access the island over the lock gates, the only way onto the island. Once the water receded and the volunteers were able to return we were then hit by the next big issue, and one that has dominated 2020 for everyone – the Covid-19 pandemic. But our Green Team were keen to restart when the government guidelines allowed, and we continued our work outdoors only, following the social distance guidance. 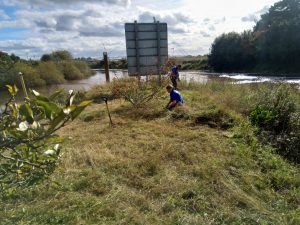 Winter is a busy time in the conservation calendar. It’s when trees and shrubs are dormant, so this is when all planting, pruning, hedge-laying and coppicing takes place. The summer was hit hard by the pandemic and we only managed to hold a handful of sessions. Invasive weed control and cutting the hay meadow were high on the agenda. The Himalayan Balsam is a big issue in this area of the Severn and totally dominated the island. The volunteers managed to pull up almost every plant in just two sessions. A highlight memory for me, is the lovely day in September cutting and raking the hay meadow, a great habitat for the resident field voles! 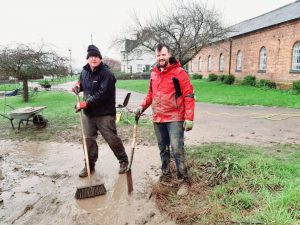 During 2020 the volunteers were also given the opportunity to take part in training. We were joined by an instructor to conduct strimmer and lawn mower training, so that our group can take on cutting the grass in the amenity areas. In November, the volunteers were lucky enough to be joined by Al Pounder from the Duckworth Trust. He leads a large volunteer group in Worcester, and he gave us hedge-laying training. More recently our Green Team volunteers have been treated to some orchard tree pruning training by Arthur Rowe from the Worcester Orchard Workers.

We had some good news in October. One of our volunteers, Robin, was successful in applying for a job at Durlston County Park in Dorset as an Apprentice Ranger. We were sad to lose him but are so happy he’s managed to follow his dream of changing career to work in wildlife conservation, something I can relate to! We were lucky to welcome Kaye, a new volunteer to the group who has settled in well and also has a real passion for wildlife conservation. 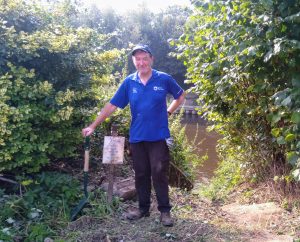 The Green Team have stayed together through the floods, the Covid pandemic, and more recently a local bird flu outbreak. Once we’re able to return we have plans to put up 20 birdboxes ready for RSPB volunteers to assist us in carrying out British Trust for Ornithology Nest-box Surveys in the Spring. This spring the volunteers will also erect some fencing, and stabilise one of the slippery paths through the woodland. The Unlocking the Severn project team are absolutely delighted with the progress the group has made, and so appreciative of all their efforts.  We look forward to to a time when restrictions are eased, so that the Green Team are able to meet up again and continue their amazing work.

For more information on volunteering for Unlocking the Severn please visit our Volunteering page.