Salmon Monitoring on the Teme- A Volunteer’s Experience 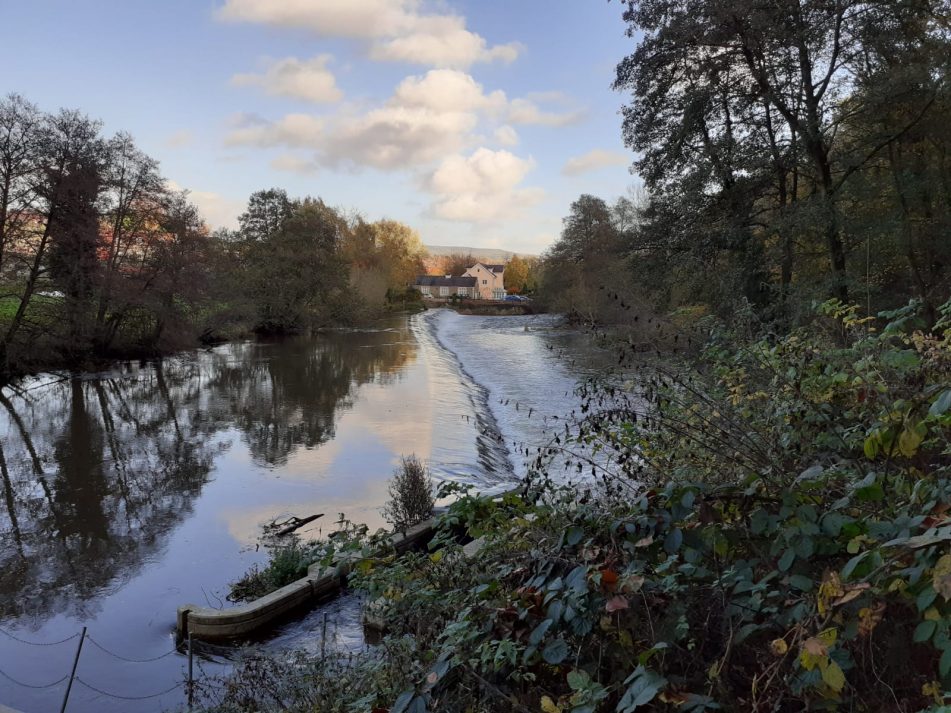 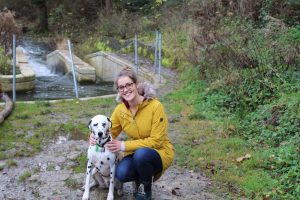 My name is Shannon and I have been working as a salmon monitoring volunteer throughout October and November 2020 on the River Teme in Ludlow. It has been a fantastic opportunity to get outside and see the wildlife on my doorstep whilst helping to collect some really important data which will help to assess the efficiency of the new fish pass on Mill Street Weir.

Prior to installation of the pass, and due to the height of the weir, salmon could only swim over the weir at high flows. At other times, salmon would still attempt to cross the weir by jumping. Where fish have to jump to pass such barriers, they become injured and exhausted which can reduce their survival rate. As at other weirs or barriers without passes, this delay in migration also causes overcrowding of the weir pool and increases the susceptibility of salmon to parasites and diseases as well as predation. These factors limit the numbers of individuals reaching spawning gravels further up the catchment and the additional energy used can lead to fewer eggs being laid from those that are successful. 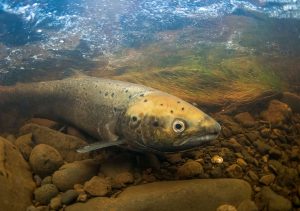 In recognition of the above issues, during the winter of 2018-19 the Severn Rivers Trust installed a Larinier fish pass on the Whitcliffe side of Mill Street Weir. This type of fish pass comprises of baffles which act to slow the flow and reduce turbulence enabling fish to pass the weir quickly and easily on their way to the spawning grounds.

The pass at Mill Street Weir was primarily constructed for salmon however it will also improve the connectivity of the river for other species such as trout, bullhead, grayling and dace.

The data collected by volunteers in 2018 during the migration period (late October to early December) showed that there were lots of salmon in the river but that they were struggling to get past the weir. Due to floods in 2019, the 2020 migration is the first big test for the pass and the first chance to see if the pass has been a success. As before, the Severn Rivers Trust recruited volunteers to spend time monitoring the number of fish attempting to jump over the weir with the aim of comparing results to those collected before the pass was installed. We all booked slots in the Autumn and went down to the river to meet Rachel Davies and Peter Savage who gave us some history on the project and some training on how the data should be collected to ensure reliability. We were sent on our way with a little package of data sheets, a pencil and some hand sanitiser (of course!) with the hope that we’d return over the coming weeks to conduct some surveys.

Being local I was able to pop down to the river frequently and stop by the weir to do a quick survey when out walking or taking a well needed break from my laptop and working from home! Each survey was 20-60 minutes in length. Before starting we had to record the usual survey information including date and time but also make a note of the river flow level and cloud cover (measured using the Okta scale), as these factors can influence the movement of fish in the river. The survey itself involved watching the weir and noting down the following: 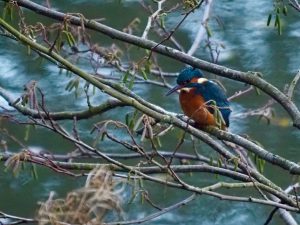 There was also space on our survey forms to record any other wildlife sightings. On a number of occasions, I spotted the kingfishers and even the otters on one cold grey morning. The heron was also a frequent visitor eying up the weir looking for his next meal! The whole experience would actually have been rather tedious without these sightings as it soon became apparent that few fish were jumping at the weir (at least during the surveys that I conducted!). It is surprising how slowly 20 minutes can go when you are staring at a torrent of water passing over the weir. It sort of puts you into a state of hypnosis! To break it up a bit I’d sometimes do two 20-minute surveys with a 5 minute break in the middle.

In all I have thoroughly enjoyed the experience. What I found most enjoyable was speaking to fellow residents of Ludlow and other volunteers who share my passion for our rivers and wildlife. Many walkers stopped to ask if I had seen any salmon or if the otters were at play and were grateful for the work that the Severn Rivers Trust and partners have been doing. The work of these organisations  helps to protect the salmon and remove some of the barriers to their successful return to spawning grounds which will inevitably help to protect and hopefully boost their populations in the Teme catchment and beyond.

All that is left now is to see the results of this monitoring work. I have an inkling that it will show that the pass has been a success but I am excited to see just how successful and what plans for other fish passage improvement works might be generated as a result. Watch this space! 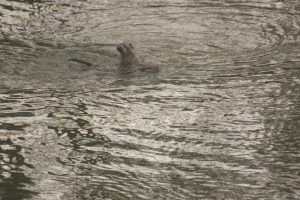