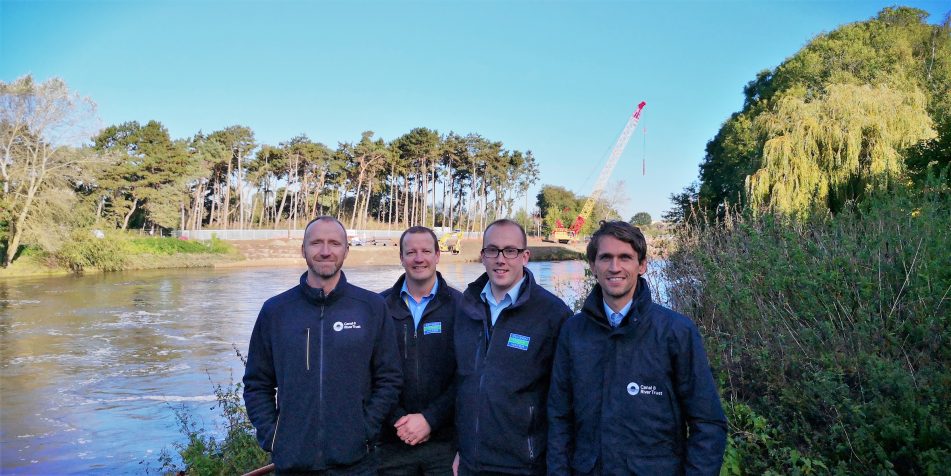 Severn Trent join forces with major project for people and wildlife on the River Severn.

Riverside construction work on a fish pass at Diglis, in Worcester is set to progress as Unlocking the Severn announce a new partnership with Severn Trent.  Severn Trent will provide crucial access for the construction of the fish pass adjacent to Diglis Weir, through their riverside waste water treatment plant.  Local residents interested in the project and the construction works can attend a drop-in information event on Diglis Island, 3pm to 6.30pm on Tuesday 22nd October.

The fish pass being at Diglis has an innovative design that will include the first underwater river viewing window in England – providing a unique perspective on the river’s wildlife.  Key species include the twaite shad, an endangered sea-dwelling fish related to the herring that migrates up the River Severn every spring to spawn.  In the mid 1800’s, weirs were built that stopped shad reaching their natural spawning grounds upriver and the Severn shad run, once a natural phenomenon involving hundreds of thousands of fish every spring, rapidly diminished as a result.  However, thanks to four fish passes planned along the river: at Diglis, Bevere, Holt and Lincomb, as well as works at two weirs on the River Teme, more than 150 miles of river habitat will be unlocked for twaite shad for the first time in more than 170 years.

The project is one of the largest of its kind ever attempted in Europe and has been made possible through funding from the National Lottery Heritage Fund and the European Union LIFE programme. Unlocking the Severn is being run by the Canal & River Trust, Severn Rivers Trust, Environment Agency and Natural England.

Jason Leach, Programme Director explains: “We are pleased to announce that Severn Trent have come on board as a partner for Unlocking the Severn in Worcester.  Works commenced at the fish pass at Bevere in May, whilst we have been working hard behind the scenes on the logistical challenges at Diglis.  This partnership with Severn Trent is the fruition of working closely together over the past months on common goals around the health of the river and engaging the community.  It is great news for local residents as, thanks to the support of Severn Trent we can now route construction vehicles and machinery through their site and avoid disruption on the Kingfisher path.”

An integral part of Unlocking the Severn is engaging local communities with the rich natural heritage of the UK’s longest river.  Workshops, exhibitions and festivals are all planned to take place over the next two years of the project.  The project has recently completely the structural renovations on a heritage building owned by Canal & River Trust, on Diglis Island in the middle of the River Severn.  With the addition of further visitor facilities and interpretation resources, this will become a unique learning space in the middle of the river for use by local school and community groups from the summer.

Rob Cunningham, Environment Lead for Severn Trent, commented: “We’re really pleased to be able to help this exciting project to improve working access to site of the fish pass at Diglis and to avoid disruption to people who enjoy the local greenspace footpaths.  After decades of investment in reducing pollution it’s fantastic to help solve the final piece of the puzzle that has prevented shad returning to their former spawning grounds.  And we look forward to working with Canal & River Trust and the Unlocking the Severn partners to engage local residents and schools in the project and how we can work in partnership to help care for the River Severn and the wildlife it supports.”

Local residents who are interested to find out more about this project are invited to join members of the project team on Diglis Island on Tuesday 22nd October between 3pm and 6.30pm. Further details of the fish pass construction works at Diglis will be available, together with information about the wider conservation and river engagement aims of the project, and ways that local people can get involved.

See details of our information drop-in event on 22 October