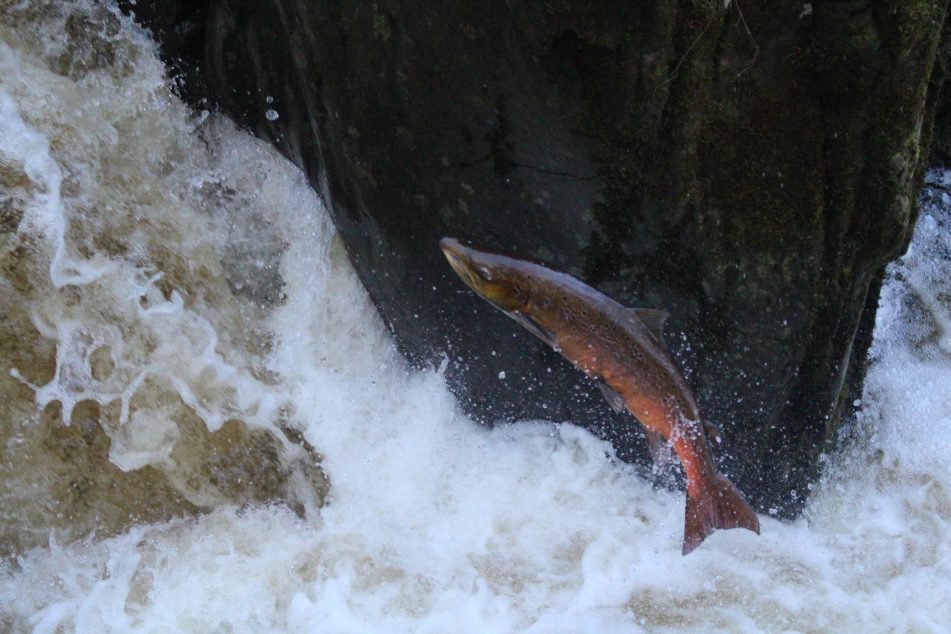 During this, the International Year of the Salmon, we were thrilled to receive an account of Salmon on the upper Teme.  A local resident who has lived his whole life at Felindre on the River Teme above Knighton, reported that this year he has seen salmon jumping – the first time that he has ever Salmon that far up the Teme.

“This is really fantastic news, and goes to show how much impact improving fish passage such as the works by the Unlocking the Severn project can have! It’s great to hear this anecdotal evidence and that some of the Teme salmon have made the most of periods of high flow we’ve had this year to reach so far up the catchment. The Salmon seen at Felindre are likely to be some of our really precious early migrating ‘spring’ fish, the largest and potentially most genetically diverse in the river. These ‘spring’ fish also have the potential to produce the most offspring. With salmon numbers really struggling at the moment, it is critical to protect these fish and ensure as many as possible make it to spawn in as best condition as possible.

“The habitat in the upper Teme has the potential to be good or very good for salmon spawning yet previous surveys have detected little to no juveniles, one of the major reasons being adult fish struggling to get there in the first place. So, improving fish passage past barriers further downstream could have really significant positive effect on the local salmon population.”

“Severn Rivers Trust have a rolling programme dealing with other barriers in the upper catchment to make passage easier for the salmon all the way up the Teme, so hopefully this year’s report will be the first of many from the headwaters. We are installing a fish counter at Ashford on the River Teme south of Ludlow toward the end of September. We will be monitoring throughout 2020 and we will be looking out for early running spring fish back on the upper Teme again next year!”