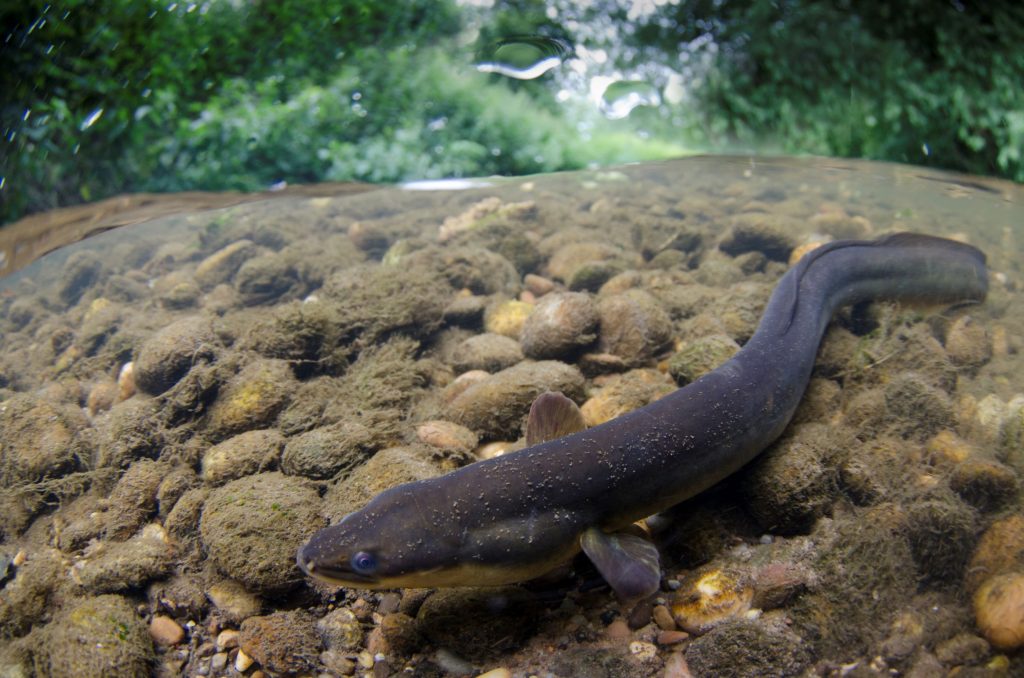 The European eel is very unusual in appearance. They have an unmistakably long and slim ‘snake-like’ body with very long dorsal and anal fins that meet at the tip of their tails. Eels are migratory fish and they return to the sea when they become adults to reproduce in the Sargasso Sea just north of the Caribbean. They can still grow to lengths of over 1m in British freshwater. As well as being very long, they are also very powerful fish and create a lot of slime much to the dislike of anglers. If eels become stranded, they have been known to ‘slither’ over land during wet mornings. Some species of eels can live for up to 100 years in the event of being unable to complete their spawning migration, but more typically the European eel spends between 7 and 25 years in freshwater.

In freshwater eels are very important ecologically as they scavenge on the decaying remains of mainly fish, but also mammals and birds. They will also prey on invertebrates and other fish amongst the substrate of lakes and rivers. Small eels are often caught by anglers as they are well known to be ‘unfussy’ with their food and will take most meaty baits. Anglers targeting large eels will often use dead smelly fish, like smelt, as bait. They must be returned to the water, whereas in times gone by many would be taken for the pot. Smaller eels are an important food source for birds like bittern, heron and egrets. They are particularly favoured by otters because of their high fat content.

Eels can pretty much live anywhere, but grow quickest in estuaries and nutrient rich low land rivers, pools and canals. Those that migrate further to the head waters will take a longer time to mature, therefore they are constantly migrating to find the best growing conditions throughout their lives. Throughout history Eel numbers in the River Severn have been very healthy, however in recent years numbers throughout Europe have severely declined leaving them critically endangered. It’s hoped that with new laws aimed at protecting them, an increase in river water quality and the construction of fish passes and weir removal, numbers of these incredible fish will begin to rise once again.

It is now known that European eels hatch in the Sargasso Sea and as larvae they travel to European and North African river estuaries. They morph into a ‘second larval stage’ (elver) where they continue their migration into freshwater. After several years, when they reach adulthood, they return downstream and begin their journey back to the Sargasso Sea to reproduce. When they reach the continental shelf around Europe they are yet to be either female or male. Their sex is determined by density dependent factors. Eels on the west facing coasts and rivers, where recruitment is plentiful from the prevailing Gulf stream, are predominantly male. Those that find themselves on the East coast are more likely to be female. This life strategy is to allow the females, that need to grow bigger and live longer to develop their reserves for egg production, can do so.