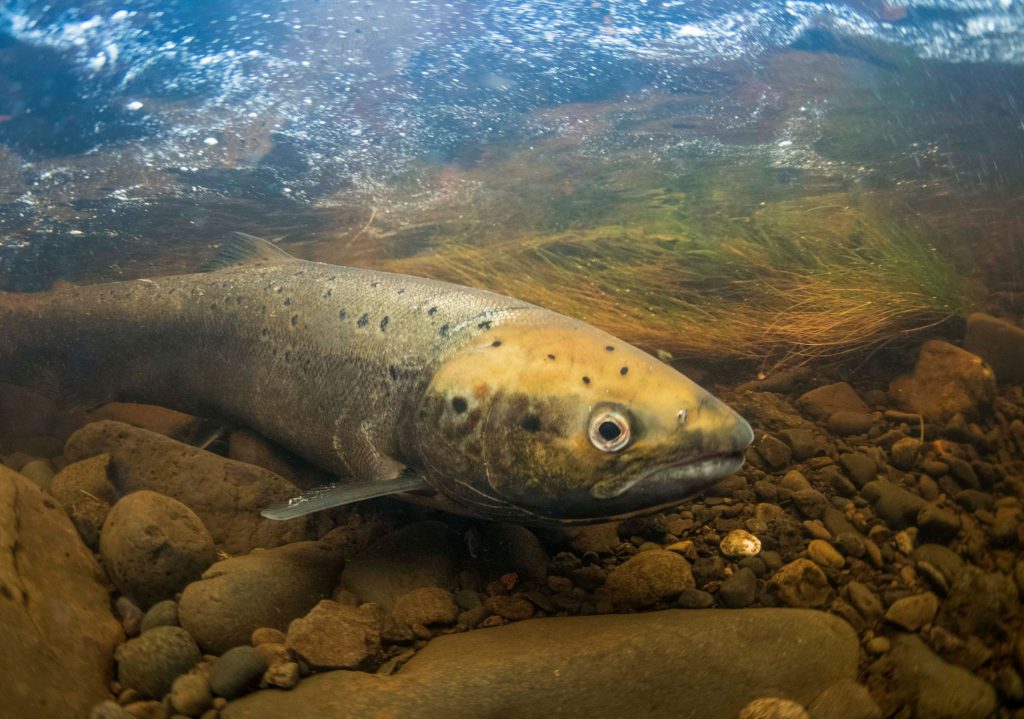 The incredible, complex life cycle of the salmon mean that they appear in rivers both at the beginning, and the end, of their lives. They hatch in upper reaches of certain rivers in Europe in nests called ‘redds’. When they are immature (parr) they are small (up to 5cms long), slim silver fish with vertical darker markings to help with camouflage. During this stage of their lives they feed to gain weight, are highly territorial, spending between 1 and 4 years (typically 2) in freshwater before starting to shoal and swim downstream, turning silver or smolting to allow them to survive in estuaries before their long migration to the North Atlantic. When they are fully grown, they return to their natal river to swim upstream to reproduce. The adult fish are long and slender (between 60 and 150cms in length) and silver in colour with darker speckles on their backs. Breeding age adult males take on a deep red colour and females turn a dull grey/brown.

As parr these fish stay in, or near, the redds and feed on microscopic plankton and invertebrates. As they begin to migrate downstream they are able to feed on slightly larger invertebrates, and when they are adults they will predate other fish. When adult fish return to rivers, they just have one thing on their minds… spawning! The shock of re-entering freshwater means that their stomachs actually begin to disintegrate, and their feeding habits change. They eventually stop feeding before they reach their spawning grounds. They are an important food source for otters, especially when they are spawning as they become very tired after their monumental journey.

Salmon tend to spawn in November and December in redds that they burrow into gravel substrate in the shallow upper reaches of rivers. On the River Severn, and many rivers around the world, man-made weirs make it difficult for the fish to migrate. The most powerful, determined individuals are able to ‘leap’ up some of the barriers to gain upstream access. November is a good time to see these fish using fish-passes or ‘leaping’ up obstacles. Shrewsbury weir is typically a good spot to view these amazing animals leaping towards the end of their epic journeys upstream. Salmon actually waste lots of their energy leaping up obstacles meaning they’re very often too tired and die before getting the chance to spawn.

Latest research is starting to unlock the mystery of their sea going migration. Salmon are not randomly distributed in our seas but rather follow very narrow migration routes around our coastline to reach their North Atlantic feeding grounds. These are very much like fish motorways. There is also evidence that groups that shoaled on their way down river remain in these small groups for their time at sea returning to the same river with the same individuals they went to sea with between 1 and 4 years previously. Not all Atlantic salmon die after spawning. A small percentage (called kelps) drop back downstream and return to the sea to feed.